Murder at the Mill by M. B. Shaw: A Review and a Giveaway! 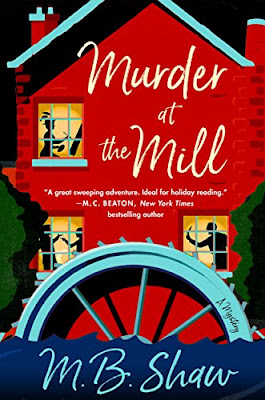 Greetings!  Searching for You by Jody Hedlund, The Bride of Ivy Green by Julie Klassen, The Secret by Jennifer Wells, Game of Scones by Mary Lee Ashford, New Arrivals at Mulberry Lane by Rosie Clarke and Murder at the Mill by M. B. Shaw come out on December 4.  A bonanza of delightful new novels. 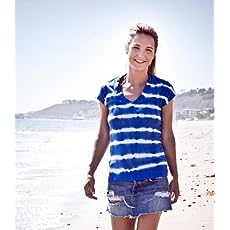 M.B. Shaw is the nom de plume for Tilly Bagshawe.  Ms. Bagshawe regularly contributed to the Sunday Times, Daily Mail and Evening Standard as a journalist. She then turned her attention to writing novels.  Her first published book was Adored which became a New York Times and Sunday Times bestseller.  Ms. Bagshawe divides her time between the United Kingdom and America working on her own books and the new series of Sidney Sheldon novels.

Murder at the Mill by M. B. Shaw takes us to charming village of Hampshire in England.  Iris Grey, a portrait painter, has rented out Mill Cottage from Dom and Ariadne Wetherby.  Dom is the charismatic author of the Grimshaw novels.  Iris felt she needed time away from her playwright husband, Ian McBride whose career is on a downswing along with his attitude.  Dom is retiring from writing and publishing his last Grimshaw book.  Ariadne has requested Iris paint Dom’s portrait in honor of the occasion.  During the sittings, Iris notices tension among the members of the Wetherby family.  At the boisterous annual Wetherby Christmas Eve party, Iris meets Graham Feeney, lawyer and friend of the Wetherby’s.  She is attracted to Graham, but Iris has yet to make a decision regarding her marriage.  After a quiet Christmas day, Iris hears a scream down by the river.  Lorcan, the Wetherby’s youngest son with Down’s syndrome, was playing with his boat in the river and it caught on a body.  It looks like a suicide, but the victim had no reason to harm himself.  Iris, with help from Jenna Wetherby, begins searching for the truth.  The villagers are a curious and gossipy bunch who are happy to give Iris the lowdown on the Wetherby clan.  Can Iris uncover the truth?  Join Iris Grey in Hampshire on her inaugural investigation in Murder at the Mill.
Murder at the Mill is set in Hampshire, England which will please readers who enjoy English cozy mysteries especially those with a bit of edge to them.  Hampshire is a small village where gossip runs rampant.  Iris Grey is a portrait painter known for capturing the essence of her subjects.  Doing a portrait of Dom Wetherby would be a feather in her cap and would greatly help her career.  Iris has a colorful and quirky clothing style which some find garish.  Dom is known for being charming and flirtatious which makes it hard to get to know the real man.  Billy Wetherby, the middle son, is the villain of our piece.  He has just been released from prison and a lack of funds has him living at home once again.  Billy and Ariadne are frequently at odds.  There are numerous characters in Murder at the Mill.  It can be hard to keep them all straight.  It is made more difficult since the point-of-view alternates between several of them including Iris, Marcus Wetherby, Ariadne Wetherby, and Jenna Wetherby.  I think the novel would have benefited if the story had been told from Iris’ perspective or in the third person.  It would have helped the flow of the story.  The author has a descriptive writing style and likes to use similes.  Some of the authors comparisons made me cringe (“the spindly tree branches swayed and shivered pathetically in the wind like the starved limbs of concentration-camp prisoners, pleading for escape” or “Lorcan tore at the wrapping on his gift like a starving child clawing at a bag of rice”).    Her descriptions, though, help readers imagine the scenes in the book and bring the story to life.  There are two mysteries in Murder at the Mill with multiple suspects, good clues and red herrings.  I like how the two whodunits tied together and all the threads were tired up at the end.  I do want to warn readers that there is a significant amount of foul language and animal lovers will be offended at how Ariadne uses real animals as subjects for her sculptures (she uses anesthesia to put them to sleep while she sculpts).  Murder at the Mill is a potboiler that will have you on the edge of your seat as you quickly turn the pages to the surprising ending.

Murder at the Mill is available on December 4 at the following retailers:  Amazon, Barnes and Noble, iBooks, Powell's, Kobo and Google Play.  In honor of the tour, I (courtesy of the publisher--St. Martin's Press) am giving away one copy of Murder at the Mill by M.B. Shaw to someone who lives in the United States (sorry, but it is not open to international readers).  To enter the contest, please follow my blog (by email, Twitter or Google+--upper right) and leave a comment with your email address (so I can contact you if you win).  The contest ends on December 9 at 11:59 pm.  Good luck!  Take a moment to visit the other stops on the tour (schedule below) where you can see what others thought about Murder at the Mill, enter their giveaways and read an excerpt from the book.  Thank you for stopping by today.  I will be back tomorrow with my thoughts on Tandem Demise by Duffy Brown.  The third novel in A Cycle Path Mystery series.  Take care and Happy Reading! 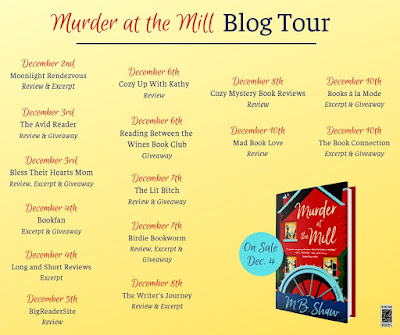