In Peppermint Peril by Joy Avon: My Review of A Tea & Read Mystery 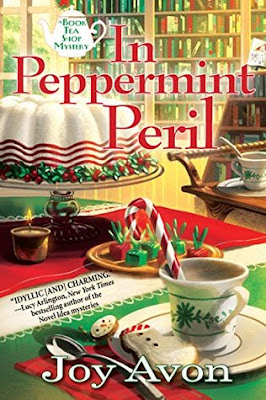 Greetings!  One Taste Too Many by Debra H. Goldstein, Valentine Candy Murder by Leslie Meier (two previously published Lucy Stone Valentine Mysteries), Wine and Punishment by Sarah Fox, Steamed Open by Barbara Ross, Fashions Fade, Haunted is Eternal by Rose Pressey and The Amish Sweet Shop by Emma Miller, Laura Bradford and Mary Ellis are out today.  Dreams of the Witch by Deanna Chase is the fourth book in the Witches of Keating Hollow and it is now available for purchase.  Crewel and Unusual by Molly MacRae comes out on January 1.  Do not miss the return of the Haunted Yarn Shop Mystery series.  So many wonderful new books to read!

In Peppermint Peril by Joy Avon is the first A Tea and Read Mystery.  Calliope “Callie” Aspen has returned to Heart’s Harbor, Maine to help her Great Aunt Iphy with her tearoom, Book Tea.  Iphy incorporates mystery books into her pastry decorations and hosts book themed events.  Callie is carting the supplies to Haywood Hall for the tea party being hosted by Dorothea Finster, the town’s oldest resident, a week before Christmas.  Callie has fond memories of playing at Haywood Hall as a child plus she vividly remembers the crush she had on Stephen, one of Dorothea’s relatives.  Dorothea has invited various relatives and friends to hear an announcement regarding her will.  Sheila Du Bouvrais, Stephen’s wife, has her own agenda for the event and insists that Callie hide an heirloom engagement ring in the cake.  She is trying to force Ben Matthews, a lawyer, into proposing to her daughter Amber, despite Amber’s lack of interest.  When the ring box is removed from the cake and opened, they find the empty.   A scream then rings out from the conservatory where Amber has stumbled upon Mr. Leadenby, the gardener and storyteller, stabbed to death.  Deputy Falk is in charge of the case since the sheriff is out of town for the holidays.  Callie and Iphy join forces to solve this knotty conundrum before Santa slides into town on his sleigh.

In Peppermint Peril we are taken to the small town of Heart’s Harbor, Maine where Callie grew up.   After Stephen broke her heart by marrying her childhood friend, Sheila, Callie took a job as a tour guide.  Callie has traveled around the world with Travel the Past, but it left her little time to visit home or have a personal life.  Callie is quickly confronted by her past when Iphy’s latest catering gig takes her to Haywood Hall.  Haywood Hall is a special place to Callie.  When I started In Peppermint Peril, I felt like I was dumped down the rabbit hole like Alice.  It felt like I started in the middle of the book instead of the beginning.  Readers barely get a chance to know Callie and Iphy, when a hoard of other characters are introduced.  Callie’s dog, Daisy is an adorable addition to the story.  Iphy is lovely woman with a delightful tea shop with mystery book themed pastries.  She hides clues on her cakes for the guests to solve.  I enjoyed the references to the older mystery novels.  Iphy’s creations sounded beautiful and delectable.  The mystery was multi-faceted with pointed clues and multiple suspects.  Unfortunately, I easily identified the killer early in the story.  The why is revealed as the story progresses.  The one thing I did not like is Callie jumping to conclusions which led to exasperating situations.  She spends a significant amount of time thinking and speculating about the case.  Her investigation technique is unique.  In Peppermint Peril has steady pacing along with the author’s casual writing style which made the story easy to read.  Unfortunately, the book lacked depth.  There are details missing on the main characters and the town.  The ending felt incomplete.  I believe the author was trying to start the series with a BANG, but it fell flat.  I am giving In Peppermint Peril 3 out of 5 stars.  The series has potential, and I hope the author is more successful in her next A Tea and Read Mystery.

Sweet Tea and Secrets is the next book in A Tea and Read Mystery series which will be available on June 11, 2019.  I appreciate you joining me today.  Tomorrow I will share my review of The Christmas Star by Donna VanLiere.  Until then, take care of yourself and Happy Reading! 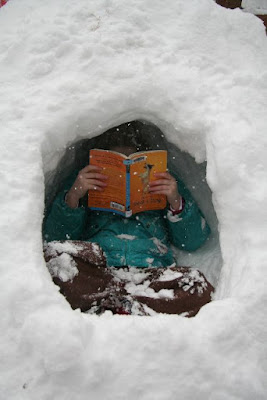