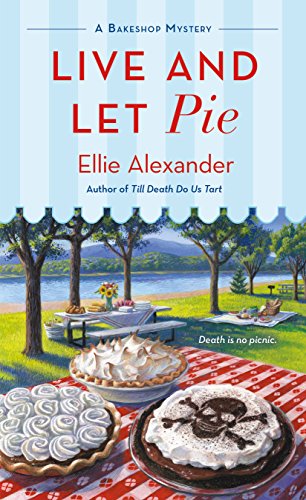 Happy New Year's Eve!  2018 has flown by so quickly for me.  I sincerely hope 2019 will be a better year for my mother and myself (we have had a rough year).  Do you make New Year's Resolutions and do you keep them?  I always had trouble keeping my resolutions. Murder, She Meowed by Liz Mugavero will be released on January 29 along with Dead as a Door Knocker by Diane Kelly.

Live and Let Pie by Ellie Alexander is the ninth A Bakeshop Mystery.  Jules Capshaw is busy running Torte and supervising the renovations.  With the shop expansion, it is time to hire some new employees.  Jules’ mother, Helen and her new husband have been house hunting.  Helen requests that Jules accompany her to look at a house on Emigrant Lake and they can then enjoy a picnic afterword.  Unfortunately, the picnic takes a backseat when two teenage girls discover a skeleton while diving.  George Mill went missing in the 1960s when the town of Klamath Junction was flooded for Emigrant Lake expansion, and now his body has finally been found.  Edgar Hannagan is selling his lot, and he has numerous interested parties including the owner of the Nightingale B&B and the director of the homeless council.  When Edgar is found murdered, Jules sets out to track down the killer.  She must work in her sleuthing in between the grand re-opening of Torte, two bickering employees, the 58 year old crime and her indecision regarding Carlos.  Jules dives into baking to avoid thinking about her marriage, and her delectable treats provide a handy excuse when visiting the people on her suspect list.  Come along to Ashland, Oregon for Shakespeare, friendly faces, tasty desserts and a touch of murder. 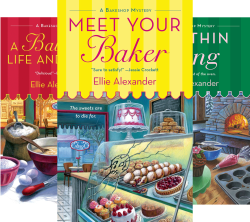 Live and Let Pie takes us back to Ashland, Oregon and Jules Capshaw.  She cannot wait for the renovations on Torte to be finished.  Jules is hiring three new employees who she hopes will fit in with the rest of her staff, but change can be difficult for people.  I like Ellie Alexander’s conversational writing style.  It makes for an easy, breezy book with steady pacing.  Baking is prominently featured in the story.  Creating and baking of pastry is described in detail (one example is a fluffernutter).  I find that it interrupts the flow of the story with so many baking breaks.  I wish the author would take the time to further develop the mystery instead. While Live and Let Pie is the ninth book in the series, it can be read alone.  The author summarizes what has happened to Jules so far for new readers.  Jules is still contemplating what to do about her marriage.  This has been going on for nine books and it is time for a decision to be made.  Personally, I am not a fan of the suave Carlos who is handsome and seems to charm everyone with his personality and cooking (too perfect).  I kept hoping Jules would ditch the chef for Thomas.  Jules also has a major decision to make regarding her living arrangements courtesy of a wonderful offer from the Professor and her mother (I do not know why she hesitated). I like the staff of Torte along with Helen, the Professor, Thomas and Lance.  Lance provides many humorous moments in Live and Let Pie.  One cannot help but laugh at Lance’s antics, and he does make the sleuthing more entertaining.  I enjoyed the descriptions of the finished Torte (though, I would not like going up and down those stairs). The two mysteries are not at the forefront of the book.  I do like how they tie together, but the solution was not surprising.  I would have preferred full closure on the mysteries instead of supposition.  I am giving Live and Let Pie 3.5 out of 5 stars.  There are recipes at the end of the book for those who wish to recreate some of Torte’s creations.

Meet Your Baker is the first book in A Bakeshop Mystery series.  You can find the complete list of book in the series here on Amazon.  Ellie Alexander also writes A Sloan Krause Mystery series and A Rose City Mystery series as Kate Dyer-Seeley.  Thank you for joining me today.  I hope you have a safe and lively New Year's Eve.  I will feature Crewel and Unusual by Molly MacRae tomorrow.  Take care and Happy Reading! 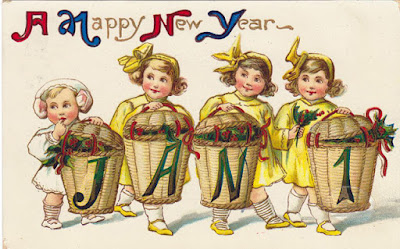