Mums and Mayhem by Amanda Flower 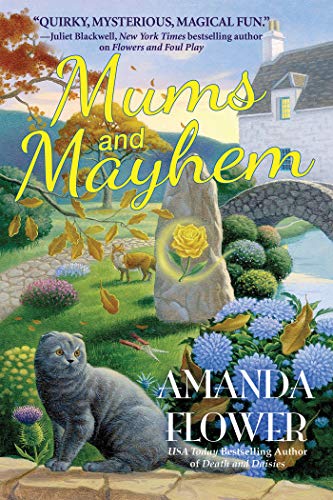 
Mums and Mayhem by Amanda Flower has Fiona Knox who owns the Climbing Rose, a flower shop, working with The Merchant Society of Bellewick to prepare for the Barley McFee’s Coming Home Concert.  This is a big deal for their small Scottish town and their leader, Bernice Brennan wants everything to be perfect.  Barley arrives with his band which has one unhappy back-up fiddler.  Fiona is surprised to learn that Barley went to school with her godfather, Ian MacCallister and her father, Stephen Knox.  Fiona’s parents are arriving any minute from Nashville.  She is hoping to get answers from them regarding her biological father.  Isla, Fiona’s flighty sister, is eager to introduce them to her almost fiancé, Seth.  The concert is success.  The band takes a quick meal break.  When Barley fails to return, Fiona volunteers to round him up from the tour bus.  Unfortunately, Barley has played his fiddle for the final time.  Fiona is worried when she learns that her father, Stephen was one of the last people seen with the victim.  Fiona is quick to delve into the case much to the dismay of her boyfriend, Chief Inspector Neil Craig.  Fiona arrives home and decides to check on her magical garden.  She finds the gate open and the flowers withering.  Someone cut the yellow rose from the menhir which cut the gardens magical link.  Fiona needs to find a way to restore the magic or the garden is gone forever.

Mums and Mayhem by Amanda Flower is the 3rd A Magic Garden Mystery.  It can be read as a standalone if you have not delved into Flowers and Foul Play or Death and Daisies.  Fiona Knox is the Keeper of a magical garden at Duncreigan in Bellewick, Scotland.  She also recently opened her flower shop, Climbing Rose.  Fiona is a smart, friendly, and caring woman who has embraced her new life in Bellewick.  She enjoys spending time with her boyfriend, Chief Inspector Neil Craig when not at her shop or working in her garden. Of course, Fiona’s sister, Isla is still in town.  She is the flighty sort who acts before she thinks.  Isla has fallen in love with Seth MacGregor who has dropped out of medical school and has a gambling problem (every mother’s dream).  I believe he changes jobs more often than his socks. Isla’s talkativeness gets Fiona into more than one jam.  Mums and Mayhem is a delightful book to read.  Great characters, a charming town, and a murder.  Barley McFee, a famous fiddler, is performing his Coming Home Concert.  This is a big event for their small town.  When Barley fails to return from a break, Fiona volunteers to track him down.  She soon regrets it when she finds Barley choked to death in his tour bus.  I am sure that Fiona would have been digging into the mystery anyway, but when her father becomes a suspect, it is a given.  I like that Fiona passes information onto Neil (no holding back).  The whodunit was not a challenge to solve, but I still enjoyed following the investigation.  There were several viable suspects, good clues, and a red herring.  There is good action plus some suspenseful moments. Mums and Mayhem is a busy book.  The concert, the parent’s arriving in town, a murder, and then trouble with Fiona’s magical garden.  Someone breaks into her garden and cuts the yellow rose blooming on the menhir.  This breaks the magical bond and causes the flora to wither and die.  Fiona needs to restore the magic to the garden, or it could be gone forever.  Hopefully, the little blue-eyed fox can help her out. I liked the humor throughout the book.  I laughed out loud on several occasions. The story is well-written, and it has swift pacing.  Mums and Mayhem was over way too quickly.  I am eager for the next A Magic Garden Mystery.  Mums and Mayhem is an enchanting tale with a fine fiddler, elderly enthusiasts, apprehensive parents, a forceful reporter, a friendly fox, a spontaneous sister, and a macabre murder. 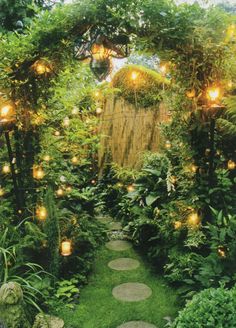 Mums and Mayhem is out today and available from Amazon*.  The other novels in A Magic Garden Mystery series are Flowers & Foul Play and Death & Daisies.  You can find other books by Amanda Flower here.  Amanda has Dead-End Detective releasing August 25.  It is  A Piper and Porter Mystery from Hallmark Publishing.  Thank you for joining me today.  I do appreciate it.  My blog is a stop on the Great Escapes Virtual Book Tour for Peachy Scream by Anna Gerard tomorrow.  It is the 2nd A Georgia B&B Mystery.  I hope that you have an enchanting day.  Take care, be kind, and Happy Reading! 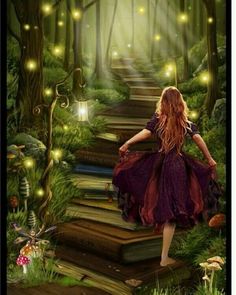