A Glimmer of Death by Valerie Wilson Wesley 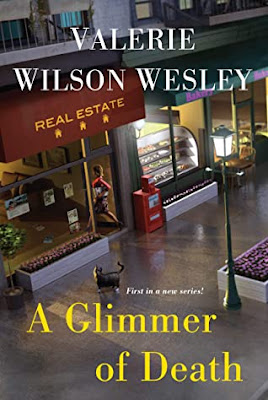 A Glimmer of Death by Valerie Wilson Wesley has Odessa Jones working as a realtor at Risko Realty for the last few months in Grovesville, New Jersey.  She can smell nutmeg in Charlie’s office which Odessa knows means death.  That night Charlie is shot to death in his office.  Harley Wilde, a fellow realtor & who feeds Odessa’s coffee addiction, is arrested for the crime.  Odessa knows that Harley did not commit the crime.  She sets out to discover which of her co-workers could have murdered Charlie.  All of them seem to have a reason to want Charlie dead.  Odessa bakes up each co-worker’s favorite treat and sets out to question them.  She hopes her gift will guide her to the guilty party.

A Glimmer of Death by Valerie Wilson Wesley is the debut of the Odessa Jones Mysteries.  Odessa “Dessa” Jones is a widow who is still grieving the loss of her beloved husband.  They had a catering business together, but Dessa has not felt like cooking since her husband’s death.  This is what led Dessa to get her realtor’s license and begin working at Risko Realty.  Dessa was hoping for a cozy work atmosphere where she would make friends, but that is not the case at Risko Realty.  Charlie Risko has a temper, and the atmosphere is tense.  Odessa inherited the family “gift”, but she is wary of it and has never learned to use it.  We learn more about Odessa, her deceased husband, her “gift”, and her family as the book progresses.   A Glimmer of Death is told in the first-person point-of-view, so we are privy to all of Odessa’s thoughts (which can be rambling and repetitious).  I was not a fan of Odessa nor many of the other characters in this book.  The exception is Odessa’s two aunts. The murder of Charlie Risko has Odessa questioning her fellow realtors in hopes of revealing the killer.  She uses baked goods as a way to get into their homes and ask questions.  There are a handful of unlikeable suspects all with motive to kill Charlie (he was an odious man).  Most readers will have no problem solving this whodunit long before the reveal.  I had hoped it would be more of a challenge since there were so many suspects.  The clues were a bit too obvious.  I do want to let readers know there is, unfortunately, some mild foul language in the book.  I like the potential love interest for Odessa.  He is a kind man who is a former cop who now runs a killer barbecue joint.  He is also helpful to Odessa’s investigation.  I wanted to like A Glimmer of Death, but it is a lukewarm read for me.  I could not get into the book. I found it a dull read (boring, unlikeable characters, sluggish pacing, and an easy to solve mystery).  The paranormal element was light and confusing.  The story needed more excitement and action.  It is classified as a cozy mystery, but it lacked that cozy feel (charming small town with friendly residents).  The ending was anticlimactic and rushed.  This is the first book in the series, so I am hoping for improvement in the next Odessa Jones Mystery. 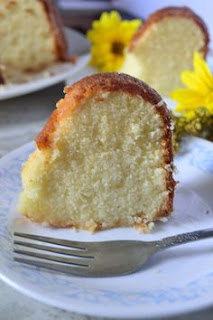 A Glimmer of Death is available from Amazon*.  You can find Valerie Wilson Wesley's other novels here.  While this story was not for me, I suggest you obtain a sample to see if it is the right fit for you.  A Glimmer of Death can be borrowed through Kindle Unlimited.    The picture above is of the 7UP Pound Cake that Odessa makes in A Glimmer of Death (recipe in book).  Thank you for reading my review today.  I will be back tomorrow to share another book with you.  I hope you have a special day.  Take care, be kind, and Happy Reading! 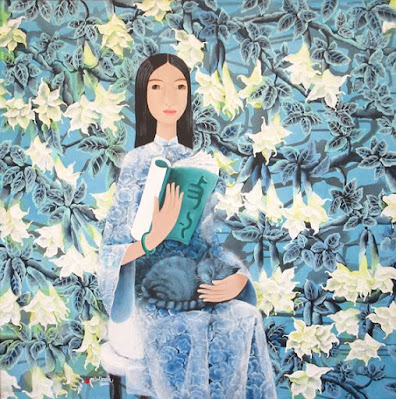