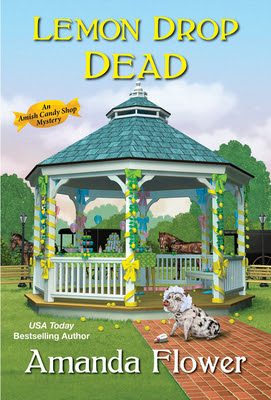 Lemon Drop Dead by Amanda Flower has Bailey King backed into a corner by Juliet Brook and Margot Rawlings.  They have decided it is best to have a baby shower for Emily Keim and that Bailey should host it.  They have even booked the venue for her.  It is up to Bailey to tell Emily that good news.  Charlotte is delighted to organize the shower and even has the theme picked out.  The baby shower is well-attended by the Amish and Englisch communities.  Emily is surprised when an Amish woman from a different district approaches her and mentions her secret—the child she was forced to give up as a teenager.  The woman disappears before Bailey can find out more information.  That evening, Bailey is working in Swissmen Sweets when someone pounds on the door.  Esther Esh, Emily’s estranged sister, drags her over to the family pretzel shop where the mystery Amish woman is dead on the floor.  Deputy Aiden Brody is quick to arrive, and he finds a threatening letter from Esther in the victim’s pocket.  Emily knows that her sister did not murder the woman and asks Bailey to help her.  Bailey dons her sleuthing cap once again, grabs some chocolates for substance, and sets out to find the Amish woman’s killer. 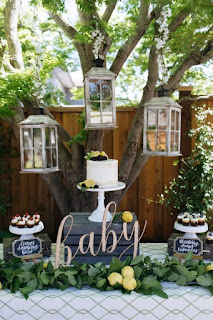 Lemon Drop Dead by Amanda Flower is the 6th An Amish Candy Shop Mystery.  It can be read as a standalone for those new to the series, but you will be missing out on a delightful series of books.  I found Lemon Drop Dead to be well-written with steady pacing and charming characters.  I enjoy visiting Harvest, Ohio where there are Amish and Englisch residents.  There is a great cast of characters that includes Bailey King, Clara King, Charlotte King, Aiden Brody, Juliet Brook, Margot Rawlings, Emily Keim, and let us not forget, Jethro.  Jethro is a show stealer along with Bailey’s cat, Nutmeg and rabbit, Puff.  Bailey is friendly, talented, and helpful.  She is actually a little too obliging as she finds herself babysitting Jethro more and more often as Juliet performs her duties as a pastor’s wife.  There is a sweet scene with Jethro, Puff, and Nutmeg that I just loved.  I like that we get to know more about Emily is this story as well as what happened to her little girl.  The whodunit was enjoyable.  I had to laugh at the 9-1-1 operator’s response when Bailey called in the dead body.  I enjoyed following Bailey as she interviewed people and collected clues.  This mystery was more complex that others in the series which I loved.  It is nicely wrapped up at the end of the book.  I enjoyed the addition of Hannah (such a sweetie) and look forward to seeing more of her in future tales.  Jethro, as always, added plenty of humor to the story.  He is one cute and amusing pig.  I was dismayed at Aiden’s news.  It certainly puts a crink in Aiden and Bailey’s relationship.  I was glad that Millie and Lois from An Amish Matchmaker Mystery series made an appearance in Lemon Drop Dead.  They are a part of Harvest too.  Fans of the series will be happy to know that Charlotte is ready to make a decision about her future (you will have to read the book to find out the answer).  I am eager for the next tale in An Amish Candy Shop Mystery series.  Lemon Drop Dead is an engaging cozy mystery with swine sitting, a child conundrum, a mystifying Amish woman, creamy chocolate, a baby shower bash, a sour sister, and relationship tribulations. 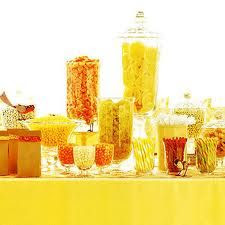 Lemon Drop Dead publishes Tuesday, April 27 and it can be pre-ordered from Amazon*.  You can find the other An Amish Candy Shop Mysteries here.  The 3rd An Amish Matchmaker Mystery is out on November 30 and it is Marriage can be Mischief. The first book in the series is Matchmaking Can Be Murder and it is currently $.99 (for a limited time).   Amanda Flower has the 5th A Magical Bookshop Mystery coming out January 11, 2022.  It is titled Crimes and Covers.  You can find Amanda Flower's other novels here.  Thank you for dropping by today.  I will be featuring Wining and Dying by Daryl Wood Gerber.  It is the 10th A Cookbook Nook Mystery.  I hope all of you have a funtastic day.  Take care, be kind, and Happy Reading! 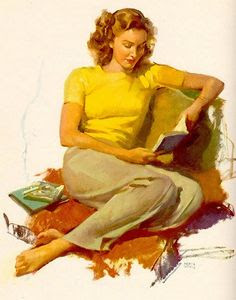