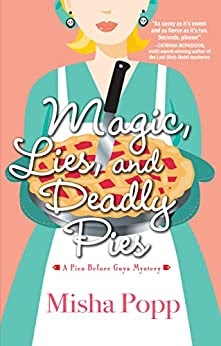 Daisy Ellery’s pies have a secret ingredient: The magical ability to avenge women done wrong by men.But Daisy finds herself on the receiving end in Misha Popp’s cozy series debut, a sweet-as-buttercream treat for fans of Ellery Adams and Mary Maxwell.
The first time Daisy Ellery killed a man with a pie, it was an accident. Now, it’s her calling. Daisy bakes sweet vengeance into her pastries, which she and her dog Zoe deliver to the men who’ve done dirty deeds to the town’s women. But if she can’t solve the one crime that’s not of her own baking, she’ll be out of the pie pan and into the oven. Parking her Pies Before Guys mobile bakery van outside the local diner, Daisy is informed by Frank, the crusty diner owner, that someone’s been prowling around the van—and not just to inhale the delectable aroma. Already on thin icing with Frank, she finds a letter on her door, threatening to reveal her unsavory secret sideline of pie a la murder. 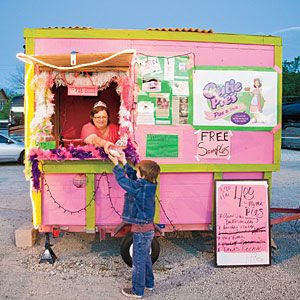 Blackmail? But who whipped up this half-baked plot to cut a slice out of Daisy’s business? Purple-haired campus do-gooder Melly? Noel, the tender—if flaky—farm boy? Or one of the abusive men who prefer their pie without a deadly scoop of payback?
The upcoming statewide pie contest could be Daisy’s big chance to help wronged women everywhere…if she doesn’t meet a sticky end first. Because Daisy knows the blackmailer won’t stop until her business is in crumbles. 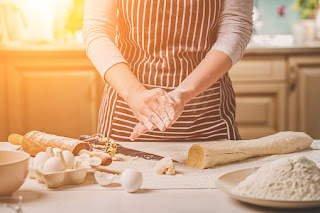 My Thoughts
Daisy Ellery is a special pie maker.  She imbues her pies with magic.  Daisy can make a person feel courageous, she can make them tell the truth, or she can kill.  She has rules in place regarding her deadly pies.  The main rule is that they are only for men who have done terrible deeds.  Daisy does not kill women with her pies.  It seems that someone is on to her secret, and they intend to blackmail her.  The blackmailer wants Daisy to deliver a special pie to three different women in exchange for his silence.   Daisy needs to find out who is behind the blackmail and stop them before they share her secret. 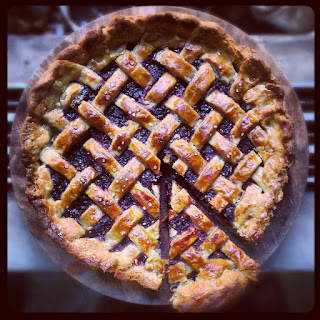 Magic, Lies, and Deadly Pies by Misha Popp is the debut of A Pies Before Guys Mysteries.  I thought the story had an interesting premise (I have a weakness for paranormal cozy mysteries).  I was looking forward to reading a fun cozy mystery (based on the blurb).  Not long after I began reading, I was disabused of that notion.  Daisy is basically a gun for hire.  She may not get paid, but she does kill.  It is hard to like a character who manages to justify her misdeeds.  I felt there should be another way for her to use her gift.  Daisy said her magic was different from her ancestors, but she is not sure why it is different.  I kept hoping this would be addressed (maybe in future books).  I did love the descriptions of Daisy’s dresses made for her by her grandmother.  I was shocked at the significant amount of foul language in this book (I find it offensive and off-putting).  I like to read cozy mysteries because they do not contain that type of language.  I liked Daisy’s dog, Zoe.  She is a friendly dog with a sweet temperament.  I also liked Daisy’s pink retro trailer, Penny.  Magic, Lies, and Deadly Pies does not have the fun cozy adventure that I was hoping for from the blurb.  It is a dark story.  The story touches upon some serious subjects (domestic violence, addiction, rape).   There is no mystery to solve much to my disappointment.  Magic, Lies, and Deadly Pies reads more like a romantic suspense novel than a cozy mystery.  There is also a pie competition and romance with a man trying to save a family orchard.  The story was missing the cozy elements and the lightheartedness.   As you can tell, I did not enjoy reading Magic, Lies, and Deadly Pies.  While Magic, Lies, and Deadly Pies was not for me, I suggest you try a sample to judge for yourself.  Magic, Lies, and Deadly Pies is a dark magical tale with a cute canine, a retro trailer, pie happy people, an outgoing orchard owner, a persuasive speaker, a bullying blackmailer, a pie competition, and a supernatural pie maker. 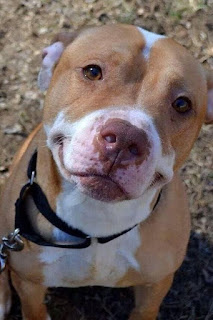 Magic, Lies, and Deadly Pies is available from Amazon*.  You can follow Misha Popp on Amazon in order to receive updates when she has a new book release.  I appreciate you taking time out of your day to read my review.  Tomorrow I am a stop on the Great Escapes Virtual Book Tours for Bear Witness by Lark O. Jensen.  It is the debut of An Alaska Untamed Mystery series.  Make sure to stop by because there is a giveaway! I am off to do more work in the garden.  I am working on finishing a side garden along our carport.  I just put in the second raised garden bed.  It takes me a while to get a project done because I can only do a little at time courtesy of my fibromyalgia (I wear out quickly plus the heat).  I need to buy the dirt to fill it (I have the plants just not the topsoil).  I have room for one more raised bed.  I already have the plastic and weed cloth down.  I just need to find one to match the other two (I was not sure another one would fit until I put in the second one).  I hope that you have a cheery day.  Take care and Happy Reading! 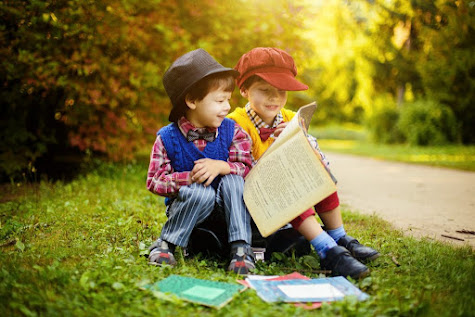