A Blessing for Miriam 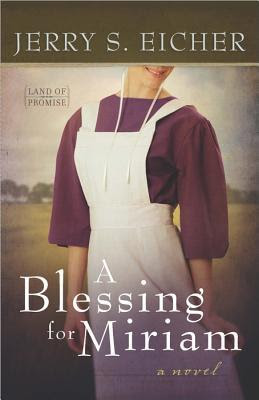 A Blessing for Miriam by Jerry Eicher is the second book in the Land of Promise series.  Miriam is still living in Oklahoma, and she is teaching at the Amish school.  Miriam is promised to Wayne Yutzy.  Miriam is looking forward to planning the wedding with her mother (Miriam wants to get married in her home district in Possum Valley in Ohio).  The only fly in the ointment is Esther Swartz, Laura’s older sister (Laura came between Miriam and Ivan Mast when they were courting).  She came to Oklahoma last month to take care of Mabel, her grandmother.  Esther seems nice and friendly, but Miriam cannot forget what Laura did to her.  She is afraid Esther will try something with Wayne (Wayne and Esther have a past and Esther still has feelings for Wayne).

Shirley, Miriam’s younger sister, went back to Possum Valley.  She did not feel like she belonged in Oklahoma.  The community in Oklahoma values inner beauty rather than outer beauty (Shirley is used to people liking her because of her looks).  Shirley has once again taken up with Jonas Beachy.  Jonas is not Amish (though he is a Christian), comes from a wealthy family, and drives a fast car.  One night they are driving too fast when a deer jumps in front of the car.  Shirley is injured and the family asks Miriam to come home and assist.

Laura and Ivan Mast are now married and expecting their first child.  Laura via correspondence is encouraging Esther to pursue Wayne.  Ivan wants Laura to stop, but none of his conversations go well (Laura has a way of twisting his words).  Ivan does not want Miriam to get hurt again.

When Miriam returns to Oklahoma, they are having many spring storms.  One storm produces a tornado that causes a lot of damage to the area including the greenhouse owned by Miriam’s uncle.  Miriam believes her money will be put to good use helping the community.  Miriam just has to tell her parents about the money.  Miriam has been afraid to tell her father because he believes money is evil and causes sin.  Miriam is not going to have an easy time of it after the tornado.  Will Wayne be tempted by Esther Swartz?  Will Miriam get to use her money for good?  How badly was Shirley injured in the accident?   To find out what happens, please read A Blessing for Miriam.

I give A Blessing for Miriam 4 out of 5 stars.  I did not enjoy this book as much as the first one in the series.  I have tried to write a review of the book without giving away any spoilers.  There is a lot of action in the book and you will definitely want to have a hankie on hand.  I think part of my dislike is how woman are treated in the Amish community (or at least how it is portrayed in this book).  I do not understand Miriam (an adult) letting her father control her inheritance, where she lives, and who she marries (I can understand seeking advice and guidance).  I do, though, look forward to reading the next book in the series to see what happens to all the characters especially Miriam.

I received a complimentary copy of A Blessing of Miriam from NetGalley in exchange for an honest review.  The review and opinions expressed are strictly my own.

A Blessing for Miriam will be out on June 1, 2015!  Thank you for visiting!  I am currently reading The Night of the Living Demon Slayer by Angie Fox (and enjoying it).  Have a great weekend and Happy Reading!

Posted by Kris Anderson, The Avid Reader at 5:49 PM