They Call Me Alexandra Gastone 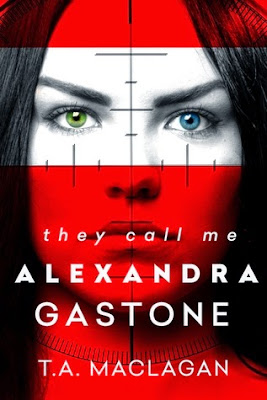 They Call Me Alexandra Gastone by T.A. Maclagan is a young adult novel.  Milena Rovka is a young girl who was born in Olissa.  At age seven her father took her to Compound Perun.  Perun is a school that trains children to be spies.  By the time she was eleven she had been trained and had plastic surgery to change her face.  Milena Rovka no longer exists.  She is now Alexandra “Lex” Gastone.  Perun is having her replace the real Alexandra Gastone whose grandfather, Albert Gastone, works at the CIA.  The real Gastone family ends up in a car accident with both parents dead.  The new Alexandra is given identical injuries and placed in the car.

Fast forward a seven years and Lex is now seventeen.  Lex is a senior in high school, has a little three-legged dog named Orkney, and has a boyfriend named Grant.  Lex meets with her handler, Varas once a month to check in and pass along information.  Varas has not contacted her this month and Lex is a little worried.  She also notices a tail on her one day and wonders what is going on.  It turns out that the President of Olissa is visiting the United States.  Perun wants Lex to poison him and frame Albert for the crime.  After a year they will get Lex out of prison and tell her she can then go back to her family in Olissa.

Lex cannot go through with it.  She finally gets to see Varas.  Varas is on the run and hiding from Perun spies.  He tells Lex that Perun is not what she thinks it is.  They are not out to do what is best for their country.  It turns out that Perun is a group of radical Olissan rebels who are trying to control on energy.  Before Lex can run with Varas, she finds out that Albert has known she was a spy the whole time.  They want her to help take down Perun.  What is Lex going to do?  Can she help stop them from killing Olissa’s President?

I received a complimentary copy of They Call Me Alexandra Gastone from NetGalley in exchange for an honest review.  The review and opinions expressed are strictly my own!

I appreciate you taking the time to read my review.  I hope you have had a good day (for a Monday) and a relaxing evening.  Take care and Happy Reading!