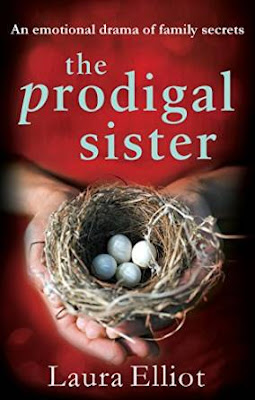 The Prodigal Sister by Laura Elliot revolves around Cathy Lambert and her sisters.  When Cathy was eight years old (1985) her parents were killed in a car accident and her sister, Lauren, was injured (they are living in Dublin at the time).  Rebecca, age seventeen, became responsible for the three younger sisters.  She had to give up going to college to become a veterinarian.  Cathy handled the loss of her parents by writing them letters.  She would tell them what was happening in her life.  Lauren felt guilty that her parents were killed (they were out that night to go to the last night of her concert) and cuts herself.  Julie enjoyed music and was in a band.  She wanted to go out on tour, but she ended up getting pregnant and marrying young.  Rebecca handled everything but was very strict (mostly with Cathy) and you could tell that she resented having to be the one in charge.  Cathy tried to be very good but Rebecca did not like her choice of friends.  Cathy became friends with Mel who was three years older and into Goth.  Soon Cathy was dressing Goth as well.

Rebecca fell in love and married when Cathy was about fourteen or fifteen.  When Cathy was fifteen, Rebecca went to help Lauren.  When Rebecca returned home, Cathy had taken off.   Cathy wanted a chance for her sister to be happy.  Fifteen years later Cathy contacts her family again.  Cathy is getting married and would like all of them to come to New Zealand.   She also wants them to meet her son, Conor.  Rebecca, Julie, and Lauren embark on a little sightseeing trip before heading to Havenswalk.  Havenswalk is the retreat Cathy owns with her business partner, Alma Gowan.  The trip is a time for reflection for all three sisters.  They reflect on the past, present, and what they want in the future.  Rebecca finally gets to find out why Cathy left home fifteen years previously.  But does she really want to know?  Cathy is finally going to have to face her family.  Something she has avoided for fifteen years.

I received a complimentary copy of The Prodigal Sister from NetGalley in exchange for an honest review.  The review and opinions expressed are my own.

I appreciate you taking the time out of your day to read my review.  Have a wonderful and relaxing evening!  Happy Reading!