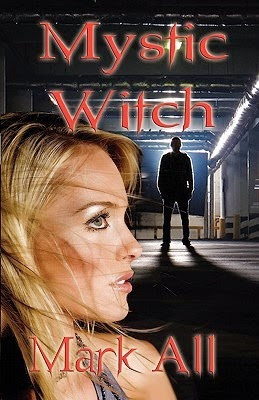 I just finished reading Mystic Witch by Mark All.  It is a paranormal romance book (with emphasis on romance).  Bailey Campbell has ignored her talents since she was eight years old and her father was murdered by Bern Emmerich.  Her grandmother (Eileen) passed away a week ago and left an unusual will.  Bailey is in her office late when she hears glass shattering.  Bailey goes to check it out and finds weird faceless creatures and they are after her.

Bailey runs to her friend, Bob's house (who has no magic or the ability to help her).  When the faceless creatures attack Bob’s house, they leave in a car.  Now they have driverless vans herding them down the highway towards her grandmother’s (now Bailey’s) house.  Frank Demming has been watching Bailey for ten years at the request of Eileen.  He is waiting for the right moment to talk to Bailey and help her (I think he waited a little too long).  Bailey and Bob arrive at her grandmother’s home and hurry inside.  Bailey is led to a book left to her by her grandmother.  The book tells Bailey that she has to control her temper and anger in order to use her powers properly and defeat Bern Emmerich.  Bailey (when she was eight) trapped Emmerich in a space where he could do no harm.  Bailey’s grandmother kept him trapped all these years with her powers.  Now that her grandmother is dead, her power/control is slowly receding and Emmerich is coming out.

Bailey with the help of Frank, Bob, and Tim (Bob’s partner) must defeat Emmerich and accept her powers.  Mystic Witch has an unusual take on magic.  There is a lot of physics talk (I am sorry to say it gave me a migraine) along with Bailey and Frank flirting as they fight for their lives.  I give Mystic Witch 2 out of 5 stars.  The description I read of this book made it sound very interesting and unique, but, in reality, this was a hard book to read.  It got to the point I hoped the main characters would get killed off.  I got tired of Bailey and her anger management issues (and her negativity).  This book does contain graphic violence and foul language.

I received a copy of Mystic Witch from NetGalley in exchange for an honest review.  The review and opinions expressed are strictly my own.

I am currently reading Premiere by Tracy Ewens.   I hope you are having an enjoyable day!  I am off to do some shopping.  Take care and Happy Reading!

Kris
Posted by Kris Anderson, The Avid Reader at 1:52 PM