The Incubus and the Angel 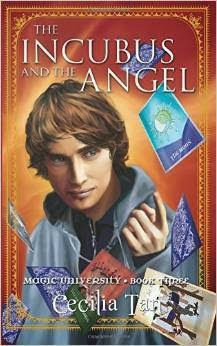 Kyle has been thinking and dreaming of Timothy Frost since they escaped from the dimensional pocket (The Towers and the Tears).  Frost has been avoiding Kyle.  He has even moved to an apartment off campus.  Kyle wants to find him and talk to him.  Kyle starts seeing Lindy.  She is enchantress (magically speaking) but her power seems to be diminishing.  Kyle agrees to help her obtain extra power for an exam, and they start dating.

Several girls on campus have been having strange dreams.  They are being visited by a person in their dreams.  In the dreams they have sex with the man whether they want to or not.  Some of the girls were virgins before the dream, but they were not after the dream (they can tell by a pearl that changes from virgin white to black).  There seems to be an incubus on campus and that is who is visiting the girls.  Who is this incubus (male version of succubus)?  Several people are having trouble with their powers.  Their powers are diminishing and they can no longer see the magical buildings (makes it hard to get to class if you cannot see the building).   What is happening?  Kyle wants to find out what is going on as well as finish his junior project and find Frost.

I received a complimentary copy of The Incubus and the Angel from NetGalley in exchange for an honest review.  The review and ratings are strictly my own!

Thank you for reading my latest review.  I am currently reading The Spellercaster's Grimoire by Mark All.  Have a wonderful weekend and Happy Reading!