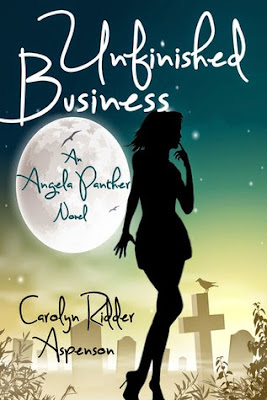 Unfinished Business is the first book in the Angela Panther series by Carolyn Ridder Aspenson.  Angela Panther’s mother just passed away.  She is married to Jake and has two children:  Emily and Josh.  Emily is a typical teenager (bad attitude and pain in the neck).  Josh is ten years old and a sweetie.  Angela is thinking about her mother when there she is in front of her.  Evidently Angela could see spirits as a child and for some unknown reason, it lay dormant until her mother came back.  Her mother came back to see if Angela could see her and to tell her about her gift.  Angela does not see it as a gift, but a curse.

Angela has a great friend named Mel.  Mel provides great comic relief and is also a wonderful friend to Angela.  They enjoy coffee, wine, and a love of cupcakes.  Angela’s mother, Fran is not the only ghost around.  Angela can see other spirits and they need help.  They have unfinished business and want Angela to assist them.  Is Angela going to embrace her gift or ignore it?  Angela has enough on her plate with her daughter acting out, her father is ill, seeing spirits, and now Josh!  Josh mentioned seeing Grandma!  Does Josh have the gift as well?  Angela just might need another bottle of wine and some more cupcakes to get through the summer.

Unfinished Business is a cute story, but a little over the top.  There is a lot of foul language and sexual references in the book.  The humor is sometimes cute and makes me laugh (my mother believes I do not have a sense of humor.  She is probably right!)  I especially enjoined the humor about menopause (the comments were right on the money).  I give Unfinished Business 3 out of 5 stars.  I liked and enjoyed the book, but did not love it (it was lacking something).

I am currently reading A Blessing for Miriam by Jerry S. Eicher.  Take care and have a nice relaxing evening!  Happy Reading! 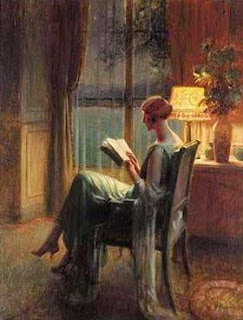 Posted by Kris Anderson, The Avid Reader at 7:38 PM