Murder at the Breakers 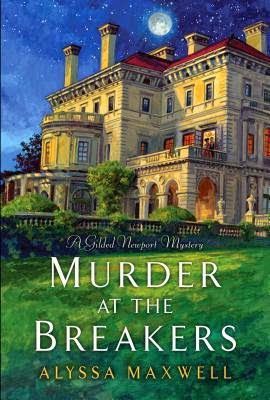 I just finished reading Murder at the Breakers by Alyssa Maxwell.  It is the first book in the Gilded Newport Mystery series.  Murder at the Breakers is an historical cozy mystery.  It is August of 1895 in Newport, Rhode Island.  Emmaline “Emma” Cross lives at Gull Manor which she inherited from her Great Aunt Sadie.  Emma also writes stories on society events for the Newport Observer.  Emma is a cousin to Cornelius Vanderbilt (a poor relations, but still a relation).  Emma is awakened early one morning by her half-brother Brady (Stuart Braden Gale IV).  Emma and Brady share a father, but have a different mother.  Brady asks Emma not to tell anyone she has seen him and could she make sure that Uncle Cornelius stays downstairs from 11:45 to midnight at the ball at The Breakers.  Brady states he is going to make something right!  Emma is used to getting her brother out of scrapes.  When Neily (Cornelius Vanderbilt III) arrives asking for Brady, Emma states she does not know where he is at that exact moment (which is true since he had left the attic).

At the ball Emma reunites with childhood friend Adelaide Peabody Halstock.  Adelaide is now married to Rupert Halstock and they are summering in Newport.  Poor Rupert’s health is failing and he is having memory issues.  Near midnight Emma realizes she has lost track of Cornelius and Emma wants to warn Brady.  She sneaks outside and she can see a light in one of the rooms (the one with the safe).  Then a fight breaks out and a man falls over the balcony.  At first Emma thought it was Cornelius Vanderbilt, but then realizes it is Alvin Goddard.  Alvin was Cornelius’ financial secretary.  Brady is found unconscious in the room.  Jesse Whyte, detective with the local police department, has no choice but to arrest Brady for the murder.  Brady cannot remember what happened.  Emma sets out to prove her brother’s innocence (she is very headstrong).

I hope everyone had a delightful Memorial Day!  We are having a hot one here in Florida.  Take care and Happy Reading!