The Case of the Invisible Dog 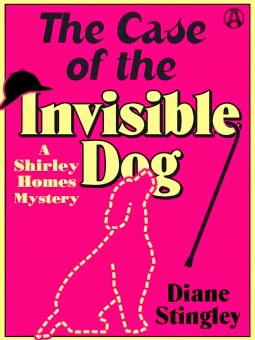 The Case of the Invisible Dog by Diane Stingley is the first book in A Shirley Homes Mystery series.  Tammy Norman is twenty-eight and has many issues.  Tammy does not know what she wants to do with her life and has trouble committing.  Tammy was fired from her job as a receptionist after calling in sick for five days and being seen by a co-worker out renting a DVD.  She is now waitressing, but Tammy is not a people person.  Tammy has seen Shirley Homes’ ad in the classified for a few weeks and decides to apply.  To apply she has to send a written letter without a resume.  Tammy gets a return letter with a set time for an interview.  When she arrives at Shirley’s office, there is a note saying not to disturb her.  It is all a test.  After making Tammy wait a certain amount of time to see what she would do, Shirley comes out of her office (where she was watching Tammy through the keyhole) and offers Tammy the job as her assistant.  Tammy accepts the position because the salary is quite good.  What is Shirley’s occupation?  Tammy will not find out for two weeks.

Shirley Homes is rich and very eccentric.  She has a scientific mind and believes she is better than everyone else.  Shirley talks down to people and insults them (she is very obtuse).  Shirley also believes she is the great-great-granddaughter of Sherlock Holmes (yes, the fictional character).  Shirley believes that Sherlock Holmes was a real person and that his enemies have wiped him out of existence.  Shirley is a private investigator (she does not have a license, but does have a cane and deerstalker cap).  Shirley recruits her first client from the Mrs. Hobson’s bakery (on the first floor of their building).  Matt Peterman is being kept awake at night from a barking dog.  None of his neighbors have a dog and do not hear the barking.  Matt lives on a street with five houses.  Only three of them are occupied.  One house has an elderly couple and the other home is inhabited by the Brown’s who just moved into the neighborhood.  Shirley is excited to solve her first case.  The next day they are visited by Detective Brad Owen.  Matt Peterman was shot in the alley behind his office.   A few days later something happens to the elderly couple that live in the same neighborhood.  What is going on?  Despite being told by the police to stay out of the investigation, Shirley and Tammy are determined to solve the case.

I received a complimentary copy of The Case of the Invisible Dog from NetGalley in exchange for an honest review.  The review and opinions expressed are strictly my own.

Other books that came out today are Twisted Magic by Marissa Farrar, The Hanged Man by P.N. Elrod, and The Silver Swan by Elena Delbanco.  The next book in the Pawsitively Organic Murder Mystery series will be out on December 29, 2015.  It is called Murder Most Finicky and it is by Liz Mugavero.

Thank you for reading my review.  I am currently reading Farmed and Dangerous by Edith Maxwell.  Have a lovely afternoon and Happy Reading!