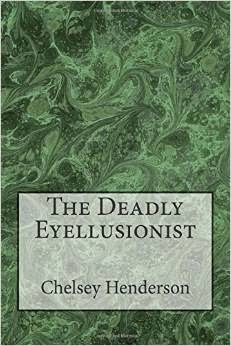 The Deadly Eyellusionist by Chelsey Henderson is an unusual book.   I originally chose it because I thought it was a paranormal mystery, but the book ended up being a horror story.  Aedick is born in 1930 in WinterMary.  His father passes away when he is a young boy and his mother handles losing her husband by going out in the evening.  She leaves young Aedick home alone at night.  When Aedick is seven years old he meets Don who is a magician.  Don offers to teach Aedick.  Aedick learns from Don for years until Don has to leave for a big show.  Aedick is a talented magician and quite popular in the area.  One night in 1963 Aedick is performing in WinterMary at the community center.  He is getting ready to perform the last trick of the night and Aedick somehow knows that it will be his last trick ever.  He asks for a volunteer and everyone is surprised when he picks Roderick.  Roderick comes to Aedick shows to ridicule him and shout boo to make him mess up his tricks (Aedick never messes up a trick).  Roderick goes into one box and reappears in a different box across stage.  He comes out of the box with a strange look on his face and wide eyes.  He opens his mouth and blood pours out.  He collapses dead on the stage.    Aedick leaves the theater and a mob follows him.  They hunt Aedick down at his home.  Aedick warns them not to hurt him or he will return in thirty years to get revenge on them and their descendants.  The mob shoots him dead and leaves him.

Thirty years later Adrick is moving to WinterMary to live in a home his mother purchased for him as a graduation present from Harvard Law School.  On the first day he meets Melalana at the grocery store.  They agree to have dinner that evening.  Adrick also meets his pen pal, Molly at the store.  Molly makes a horrible scene and is rude to Melalana.  Adrick defends Melalana which makes Molly very mad.  Molly retaliates by destroying Molly’s car.  They next day they hear about two people that were killed in an unusual way.  They were killed exactly thirty years to the day that Aedick issued his curse and died.  This is just the start.  One by one the people who hurt Aedick are killed off.  Someone is getting revenge for crimes committed thirty years ago.  Who is doing murdering these people?  Did Aedick kill Roderick and how did he do it?

I give The Deadly Eyellusionist 3 out of 5 stars.  It is different and not at all what I expected.  The murders are quite nasty and described in detail.   The author wrote this story to inspire people to face their challenges and to not take the easy way.  She wants people to make the correct choices.  Only after reading the book do I see the point she was trying to make. This book is not for the faint of heart.

I received a complimentary copy of The Deadly Eyellusionist from NetGalley in exchange for an honest review.  The review and opinions expressed are strictly my own.

Thank you for reading my latest review.  I hope everyone had a great weekend and a lovely Mother's Day!  Take care and Happy Reading!

Kris
Posted by Kris Anderson, The Avid Reader at 2:37 PM