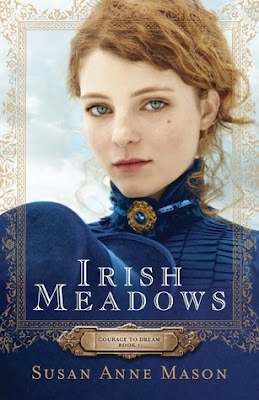 Irish Meadows by Susan Anne Mason is the first book in Courage to Dream series.  Gilbert Whelan has just finished college and is returning home to Irish Meadows.  He originally came to Irish Meadows with his widowed mother who was a housekeeper to the O’Leary family.  When she died, the family took in Gil and raised him.  James O’Leary is the head of the family.  He raises and trains thoroughbred horses.  With the new anti-gambling legislation, he is worried about the future of Irish Meadows.  Gil has avoided coming home because of his feelings for Brianna O’Leary.  They were the best of friends growing up, but then they developed feelings for each other.  Gil was hoping that time away would alter his as well as Brianna’s feelings (she cares for him as well).

James is happy to have Gil home and puts him to work on the bookkeeping.  Gil does not have plans to stay at Irish Meadows.  He wants to have his own farm one day and make a name for himself.  Colleen is the O’Leary’s eldest daughter.  She is very self-centered and a big flirt.  She is seeing a gentleman (and gets engaged to him), but has her sights set on getting a kiss from Gil (just to irritate her sister).  Unfortunately for Colleen, things go awry.  Colleen ends up sentenced to work at orphan asylum with a cousin of their mother’s, Rylan Montgomery.  Rylan is in the seminary and doing an internship at St. Rita’s (their local Catholic Church).  As Rylan and Collen spend time together, they get to know each other.  Rylan gets to see the real Colleen and starts to fall in love.  Will Rylan pick love or the priesthood?

Gil and Brianna’s feelings have not changed for one another and one night they kiss.  The next day James has Gil accept a job with Arthur Hastings (the banker).  James wants his children to marry someone with money or social status (which means Gil is not good enough for his daughter).  James also wants Gil to court Aurora Hastings (banker’s daughter).  James is about to apply for a loan and he believes Gil can help him.  Gil does not want to court Aurora but he owes James so much (for taking him in and paying for his education).  How far will James push Gil to get what he wants?  Will James be disappointed?  Will Gil and Brianna ever get their chance?

I give Irish Meadows 4 out of 5 stars (which means I like it).  It was a good, light novel and I did enjoy reading it.  It had good characters and a beautiful setting.  I found it to be easy to read because of the author’s nice conversational writing style.  It is not too preachy (just the right amount).  I have just given you a little sneak peek at what happens in this novel.  You will have to read Irish Meadows for the full story!  The next book in the series is A Worthy Heart.  It will be out on December 29, 2015.  It will involve Adam O'Leary (Brianna and Colleen's troublesome brother) and Maggie Montgomery (Rylan's sister).  It looks like it will be a good book.

I received a complimentary copy of Irish Meadows from NetGalley and from Bethany House through The Book Club Network Inc. in exchange for an honest review.  The review and opinions expressed are my own.

I promised to tell you about some new cozy mysteries that were listed on Amazon.  Here they are:  Breach of Crust by Ellery Adams, Knit Your Own Murder by Monica Ferris (one of my favorite series),  Needle and Dread by Elizabeth Lynn Casey, Vanilla Beaned by Jenn McKinlay, Rest in Peach by Susan Furlong, and Braking for Bodies by Duffy Brown.  Just click on the name of the book to go to it on Amazon (my link takes you to the Kindle edition).

I hope everyone has a great Friday evening and weekend.  I am off to relax, read, and watch Defiance, Dark Matter, and Killjoys (I enjoy supernatural shows).  Happy Reading!