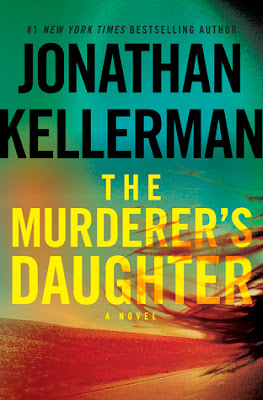 I was telling my mother about the people living off the grid (without running water or electricity) and she did not get it either.  I guess we are too used to the luxuries of life (running water, a flushing toilet, electricity for all my appliances).  I know that I could not live without air conditioning!

The Murderer’s Daughter by Jonathan Kellerman is a perplexing novel.  Grace Blades witnessed her mother murdering her father when she was five years old.  Her mother then killed herself.  Grace then entered the foster care system.  Grace got lucky when she was moved to her eighth foster home.  Her social worker, Wayne Knutsen was getting ready to change careers (go to law school) and wanted to place Grace in a good home (a last act of kindness).  Ramona Stage runs Stagecoach Ranch.  Ramona was a nice lady who recognized Grace’s intelligence and helped her utilize it.  She called a friend, Dr. Malcom Bluestone who tested Grace and then got her the right study materials.

Grace is now Dr. Grace Blades, a clinical psychologist.  She is about to go on vacation when she gets an unusual new patient.  He said his name is Andrew Toner from San Antonio, Texas.  Andrew turns out to be the gentlemen Grace picked up in a bar the night before (what a coincidence).   Andrew claims to have come to Grace based on an article she wrote many years ago (based on an actual experience from her life).  Andrew ends up leaving the appointment abruptly with giving Grace any information.  The next day Grace gets a call from the police department.  Andrew was found dead with her business card in his shoe.  Andrew is evidently not his real name.  Who was he and why did he seek Grace out?  While Grace is out driving, she notices that she is being followed.  Grace starts investigating and finds a link to someone she met briefly when she was 12, but he left a big impression.

Grace utilizes her skills to track down who is out to kill her before they can get her.  I did not enjoy The Murderer’s Daughter.  It was listed as a thriller, but was more of a book on revenge.  It is a very long, drawn out plot.  This book could have easily lost over a hundred pages.  The most interesting part of the novel was reading about Grace’s upbringing.  The novel would go back and forth from the present to Grace’s past.  There is graphic violence, sex, and foul language in the book.  I give The Murderer’s Daughter 2.5 out of 5 stars.  It sounded like such a good novel, but the story was not enjoyable to read.

I received a complimentary copy of The Murderer’s Daughter from NetGalley in exchange for an honest review.  The review and opinions expressed are my own are not influenced in any way.

I am currently reading Candy Corn Murder by Leslie Meier.  I hope you have had a nice week and a lovely evening.  Take care and Happy Reading!

Posted by Kris Anderson, The Avid Reader at 6:46 PM