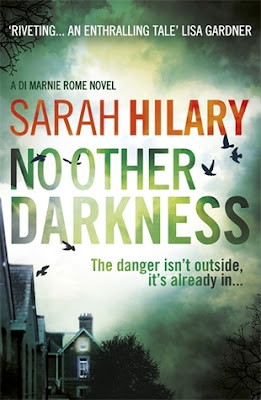 Last night I was just too exhausted to get my reviews posted.  I went to the grocery (I actually shop at two different stores to save money), loaded the car, came home, unloaded the car, and then had to put everything away.   I then had to take out the trash and recycling, feed the cats and dogs, and put clean sheets on my bed (I love clean sheets).  I was pooped (I have fibroymyalgia and get tired easily).  I did get to then lay down and read the night away.

No Other Darkness by Sarah Hilary is a British suspense/thriller novel.  It is the second book in the DI Marnie Rome series.  DI Marnie Rome and her team are called to investigate the deaths of two children.  Terry Doyle was creating a vegetable garden in the backyard of their home on Blackthorn Road when they discovered a manhole.  When Terry opened it up and went down the steps, he found two bodies lying on a bed.  They turn out to be two little boys, Archie and Fred who have dead at least five years.  They were put in the bunker with toys and canned food.  Who would have put two little boys in a hidden bunker and left them there?

Marnie, DS Debbie Tanner (the flirt), DS Ron Carling (the pessimist), DS Noah Jake (dedicated and smart), and Fran Lennox (forensics and coroner’s office) will have to work hard to figure out who put those little boys in harm’s way.  This case will bring up feelings from Marnie’s past.  She was just getting over the death of her parents who were murdered five years previously.  They were killed by their foster child who has never told Marnie why he killed them.  Their current case involves a foster child named Clancy Brand.  He is fourteen (same age as the kid who killed Marnie’s parents).  Is Clancy involved in the murder?  Are the two cases connected in some way?  Then when Terry Doyle’s two children turn up missing, the team will have to work quickly to solve the case.

No Other Darkness was an interesting book, but it did not engage me.  I was disappointed in it.  I think it went on way too long and the writer just put too many elements into the book.  After a while it got a little confusing.  I give No Other Darkness 3 out of 5 stars.  There are some rambling paragraphs were Marnie is thinking (I could have done without them).  The book also leaves us with unanswered questions (which probably means they will be answered in other books) which I found disappointing.  I prefer for everything to be wrapped up in one book.  No Other Darkness can be read without having read the first book in the series Someone Else's Skin.

I received a complimentary copy of No Other Darkness from NetGalley in exchange for an honest review.  The review and opinions expressed are my own.

I am currently reading Deadly Delicious by K.L. Kincy (not an adult novel but cute).  I hope you have a wonderful and relaxing evening.  Happy Reading!

Posted by Kris Anderson, The Avid Reader at 6:38 PM