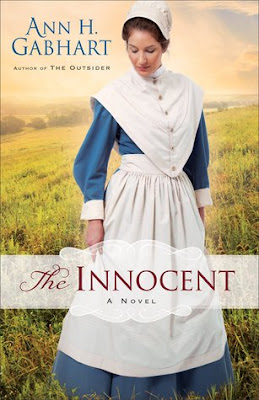 I had to run quite a few errands this afternoon, but I got them done quickly.  I needed to go the bank (a deposit), UPS store, post office to get stamps, Walmart for a couple of items, Ace Hardware for foaming wasp spray that was on sale, and then hit Walgreens to get some prescriptions.  I was able to get back home in under one hour! My legs are hurting, but now I can relax.

The Innocent by Ann H. Gabhart is an historical Christian novel.  It is September of 1865 and Carlyn Kearney has not heard from her husband in two years.  He went off to fight in the Civil War and she did not hear from him after the summer of 1863.    Carlyn is out of money and has no way to pay the lien on their property and home.  Carlyn does not know what to do.  She does not want to leave their home in case her husband, Ambrose comes back.  Ambrose was listed as missing in action.

Sheriff Mitchell Brodie arrives one day with Curt Whitlow.  Curt owns the lien on the property.  He has offered to help Carlyn out in exchange for certain favors (we all know he means sex).  Curt is married with a family of his own, but that does not stop his roving ways.  Sheriff Brodie is very nice and polite to Carlyn.  Carlyn greets them at the door with a shotgun and her dog, Asher.  Asher has been her friend since the day he arrived starving on her doorstep.  Asher does not like Curt and is very protective of Carlyn.  Carlyn has one week to leave.

After much prayer Carlyn decides to go to the nearby Shaker village of Harmony Hill.  Carlyn is accepted into the village, but not Asher.  Carlyn asks Sheriff Brodie to watch Asher for her and give him a good home.  Carlyn tries to fit into life at the village, but it is very different.  They all have to dress the same way, no violence, a lot of work, many rules, and they are always being watched.  Sister Edna is assigned to be Carlyn’s teacher or guide.  Sister Edna seems to resent Carlyn (for her looks) and is always finding fault.  One day Carlyn overhears an argument between Brother Henry Stratton and Curt Whitlow.  The next night their barn with the horses is on fire and Brother Henry cannot be found.  Sheriff Brodie sets out to find out who set fire to the barn and who wanted Brother Henry dead (poor man is found under a hay bale).  Then Curt Whitlow is missing (and assumed guilty).  When Sister Edna is found at the bottom of some steps during the night by Carlyn, Carlyn is accused of pushing her.  What is going on in this village?  Sheriff Brodie has his work cut out for him.  Mitchell Brodie is also having feelings for Carlyn.  He would like to get to know her better, but he is unable to with her in the village (Shaker’s are against marriage).  Can Mitchell keep her safe and find a way to get to know her better?  Does Carlyn have feelings for Mitchell?

Read The Innocent to find out who is messing with the Shaker village and the fate of Carlyn and Mitchell.  I give The Innocent 4 out of 5 stars.  I liked it, but I admit to not loving it.  It is heavy in scripture (a tad preachy).  I enjoyed the mystery in the story (I cannot help it if I like mysteries).   I found pleasure in how the story ended.  Ann H. Gabhart is a good storyteller.  I have read books of hers before, and I will definitely will read more of them in the future.  She has a good understanding of the Shaker culture and put it together very nicely into this book (there are others as well).

I received a complimentary copy of The Innocent from NetGalley in exchange for an honest review.  The review and opinions expressed are my own.

Thank you for reading my latest review.  I hope you have a lovely evening and Happy Reading!