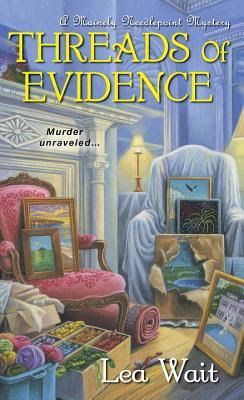 I am curious to see what others think about an issue.  I recently read on a reviewers site, that if she did not like a book she will not post a review. How does that help other people who are interested in buying the book? Twenty people can read a book and each will come away with a different opinion.  I think bad reviews are just as important as good reviews.  It gives buyers different perspectives (as long as the reviewer tells why they did not like the book).  What do you think?

Threads of Evidence by Lea Wait is the second book in the Mainely Needlepoint series.  Angela returned to Haven Harbor, Maine a month ago.  She thought she would only stay around for about six months to help her grandmother. Now, though, she is the director of her grandmother’s Mainely Needlepoint business and has started another business with her new friend, Sarah Byrne.  Sarah owns an antique shop and she also does needlepoint projects for Mainely Needlepoint.  Their new sideline business is to identify, conserve, and restore old needlework.  Angela is busy with learning the ropes at Mainely Needlepoint and preparing for her Gram’s wedding.  Gram (Charlotte Owen) is marrying Reverend Tom on the last Saturday in June.  Angela has yet to find a dress to wear as maid of honor and Gram would like to have a wedding shower (she did not get one when she married the first time).

The Gardner Estate called Aurora has been empty since Millie Gardener died in the early 1990’s.  The actress, Skye West just purchased the property.  She has hired Sarah and Angela to look at the beautiful needlework.  Millie Gardener did a lot of needlework in her later years.  Unfortunately, since the house was so neglected a lot of it is damaged.  There are ten panels, though, that were framed that can be salvaged.  Skye West asks Sarah and Angela to set up a sale of all the furniture and belonging.  She wants everyone in town to come.  Skye offers them $15,000 to get the sale ready in one week.  Turns out that Skye has an ulterior motive for buying the Aurora.  She visited the estate when she was seventeen.  She was friends with Millie’s daughter, Jasmine.  Jasmine died the night of the end of the summer party at Aurora.  It was ruled an accident, but Millie believes her daughter was murdered.  Skye has come to find out the truth.  Angela gets pulled in the case when Millie finds out that she worked with a private investigator in Arizona.   It has been forty-five years since Jasmine died.  Can they really find out the truth after so much time?  The killer does not appreciate Skye and Angela nosing around.  Millie left them some clues, but can they figure them out in time?

Threads of Evidence was a good book.  I enjoyed reading it and solving the mystery.  I like the way it was written.  The book is very easy to read, lovely setting, and good characters.  The mystery is medium level.  It is not simple, but also not extremely complex (I figured it out before I was halfway through the book).  I loved the clues and how they were incorporated into the needlepoint.  The only thing I did not like was Sarah Byrne’s obsession with Patrick West, Skye’s son.  As soon as she saw him, she was very focuses on him (even though he was more interested in Angela).  Sarah acted more like a teenager than a grown woman who owned a business.  One other thing that I found strange was Angela’s focus on alcohol. She was not a heavy drinker or an alcoholic, but it seemed to be mentioned quite frequently throughout the book.  I did not understand her concern over it (nothing wrong with a glass of wine in the evening or with dinner).  Otherwise, an entertaining novel.  I give Threads of Evidence 4.5 out of 5 stars.  Threads of Evidence can easily be relished without having read the first book in the series.  The first book in the series is Twisted Threads (which is currently $1.99 on Amazon for a limited time).  The next book is Thread and Gone which will be out on December 29, 2015!

I received a complimentary copy of Threads of Evidence from NetGalley in exchange for an honest review.  The review and opinions expressed are my own.

If you enjoy reading cozy mysteries, you will love Threads of Evidence.  Have a lovely afternoon and Happy Reading.