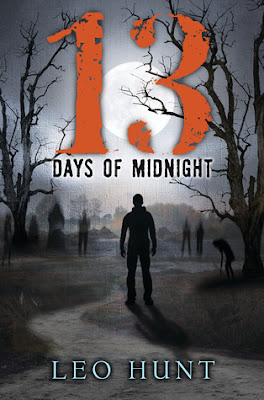 My mother decided to help me tonight by making my father's soup. She took the can and before I could say anything destroyed to ring pull top (Campbell's cans have a pull top can).  She said she did not realize that she just needed to pull up the ring (does this tell you how long it has been since she cooked or opened a can).  We finally got it open through the use of a manual can opener and a knife.  I then went to do some other things outside.  When I came back in (about 20 or so minutes later) she is still working on his dinner (the soup only took 3 minutes in the microwave).  I am not quite sure what took her so long, but I got a good laugh.

Thirteen Days of Midnight by LeoHunt is a young adult paranormal novel. Luke Manchett lives with his mother in Dunbarrow, England o Wormwood Drive.  Luke’s father just passed away which he found out about through a letter from his father’s solicitor, Mr. Berkley.  His parents had been separated for years.  Luke is sixteen years old and has not seen his father in years.  Luke goes to the solicitor’s officer and found that he has inherited over 6 million pounds.  But there are some conditions.  First Luke must sign some documents.  All are normal except the last one. It is on vellum with Gothic letting in old brown ink and written in Latin.  Luke looks at the document strangely, but then signs it (I would have asked for a translation or a Latin dictionary). Mr. Berkley seemed very eager for Luke to sign the strange document. Luke then receives some items that his father wanted him to have.  One is an old, green book with an eight pointed star on the cover.  There are also some documents and rings that his father always wore.

That night Luke hears strange noises in his house (his mother has taken medication for her cluster headaches and is out for the count).  After checking the house, Luke retires to his room with his dog, Ham.  He leaves the green book downstairs.  The next morning the book is on his nightstand.  He also finds a full English breakfast laid out on the kitchen table.  His mother is still out of it and Luke knows the dog cannot cook.  That night he sees these two strange men following men, but no one else can see them.  The next morning the two men are in his home.   They are his host.  There are eight of them (each has a name and function).  They are spirits that his father bound to him.  Turns out that Horatio Manchett was a necromancer.  His power comes from his host.  Luke has no idea how to control them, and he cannot get open the book his father gave him.  The book is the key.  Luke gets some help from Elza Moss. She has witch blood and has second sight.  She can also see the spirits.  Luke finds out that he has to get his host under control by Halloween or they will break free (and he will die).  The host is taking no chances and they kidnap Luke’s mother, Persephone.  Luke with Elza’s help has to figure out how to control or get rid of the host before it is too late.

Thirteen Days of Midnight sounds like a good book, but it really is not.  It seems to lack a good flow and some editing.  The basic idea is interesting, but I was not pleased with this book.   Thirteen Days of Midnight gets 2.5 out of 5 stars.  It was just an okay book.  I think with a little rewriting and some editing it could be a great story.  I also did not think they would ever explain the details of Luke’s power, the host, or how his father obtained his power (it explains everything at the end of the book).  There is, of course, the requisite teenage romance in the book.  One thing I did like about the book was Ham, the dog.  He was cute and ended up being a critical element.  Thirteen Days of Midnight will be out on August 25, 2015!

I received a complimentary copy of Thirteen Days of Midnight from NetGalley in exchange for an honest review.  The review and opinions expressed are my own.

I am currently reading Cancans, Croissants, and Caskets by Mary McHugh (comes out Tuesday).  I hope you have a lovely, relaxing evening and Happy Reading!

Posted by Kris Anderson, The Avid Reader at 7:45 PM