Pictures of the Past 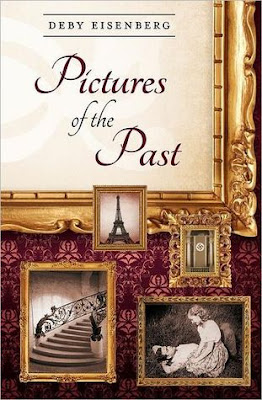 Hard to believe that it is Friday!  The week went by so quickly (and I got so little done).  Today was cookie making day.  My mother was out of her chocolate chip cookies.  I did get my father to eat some dinner.  He needs to get his strength back.  I am feeling like an overworked and underpaid maid!

Pictures of the Past by Deby Eisenberg is a novel that starts in 2004 in Chicago, Illinois and then goes back in time to relate the story (which seems to be very popular right now in books).  Gerta Rosen is celebrating her birthday in 2004 by going to the Art Institute of Chicago.  She sees a painting by Henri Lebasque titled “Girl at the Beach” (the English translation).  When Gerta sees the plaque that states Taylor Woodmere donated the piece to the museum she is upset.  Gerta remembers seeing the painting on the wall in a neighbor’s house in Berlin in 1938.  Gerta remembers that the painting belonged to Sarah Berger.

The story is soon in the papers and Taylor Woodmere is under attack.  Their family is known for their philantrophy and they are being accused of having Sarah Berger’s (a Jewish woman’s) painting.  Taylor reminices and goes back to 1937.  Taylor was being sent to Paris on business by his father.  He was dating Emily Kendall (a demanding, spoiled brat) who was staying at their home in Kenilworth, Ilinois for the summer. Taylor buys the Henri Lebasque painting at the Paris Exposition intending it as a gift for Emily.  Then Taylor meets Sarah Berger and falls for her instantly.  When Taylor’s business is over, he accompanies the family back to Berlin (supposedly to look at Mr. Berger’s factory).  At the end of his visit, Sarah plans to come to the United States as soon as she can.  She does not feel that she can leave her family yet.

We then meet Dr. Sylvie Woodmere Hunt who is Taylor’s granddaughter.  She is a clinical psychologist.  She sees a little boy when she drops of her daughter for school.  The little boy reminds her of Rusty.  She played with Rusty one day at her mansion (Woodmere estate in Kenilworth).  She never forgot that day.  Sylvie was raised by her grandparents after the passing of her mother (her father was a drug addict).

Rachel Gold in 1968 is a college student.  She meets Court Woodmere while working and falls for him.  She soon becomes pregnant.  Court gives her money for an abortion as well as the name of a doctor.  Rachel ends up traveling to New York and stays with her Aunt Ida Leber.  Rachel gives birth to a little boy and names him Jason.

Jason Stone is a lawyer.  He is married to Lara and they have a young son who looks just like him.  Jason was adopted by his stepfather when he was young.  Lara tells Jason about the woman who stared at their son when she dropped him off at school.

These four people are tied together.  The story tells of what happens to Sarah, Taylor, Jason, Rachel, and Sylvie as well as the painting.  I enjoyed reading Pictures of the Past.  It was not fabulous, but good.  I give Pictures of the Past 3.5 out of 5 stars (above okay near like).  There is a lot of history in the novel as well as characters.  The book takes us through World War II to present day.  I think with a little tweaking this book could have been better. Pictures of the Past is available on Kindle Unlimited.  This book is also available on Barnes and Noble and Books-a-Million.

I received a complimentary copy of Pictures of the Past from NetGalley in exchange for an honest review.  The review and opinions expressed are my own.

Thank you for reading my review.  I am currently reading Killer Run by Lynn Cahoon.  I hope you have an enjoyable evening and Happy Reading.

Posted by Kris Anderson, The Avid Reader at 7:08 PM