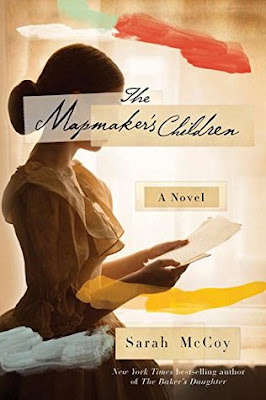 I was watching a show on HGTV called House Hunters Off The Grid.  People actually want to live without running water, electricity, windows, etc.  I cannot imagine living without a decent toilet.  I saw a composting toilet that gave me the shivers!  Water comes in from holding tanks (does not sound fresh or hot). Electricity from solar panels that are stored in batteries and converted (but you need a lot of panels).  No wifi!  I think I will stay living on the grid!

I just finished reading The Mapmaker’s Children by Sarah McCoy.  Eden Anderson and her husband, Jack have been trying to have a child for seven years (I am surprised they are still married).  Eden has gotten pregnant twice, but she miscarried each time.  After the second miscarriage, Eden has retreated into herself and withdrawn from life.  They have moved to New Charleston, West Virginia and are living in an old home on Apple Hill Lane.  One night Jack brings home a little dog.  Eden does not want a dog to be a substitute for a child.  But Cricket soon wrangles his way into her heart.  Then Eden meets Cleo Bronner.  Cleo is the granddaughter of the Mr. Bronner who is the banker.  Cleo is being raised by her grandfather.  Jack hired Cleo to take care of Cricket while he is out of town on business.  Cleo brings home the Holistic Hound cookbook for them to try.  One day Eden discovers a trap door in their pantry.  When she opens it, she finds small root cellar.  Big enough to hold people.  Eden discovers a china doll head inside.  Cleo and Eden set out to find out more information.  Eden also wants to find out if the house can be listed on the historic register.

Sarah Brown is the daughter of abolitionist, Captain John Brown.  Sarah has been quietly helping her father by drawing the maps needed.  One day Captain Brown led a raid on Harper’s Ferry for which he was arrested and hanged.  Sarah and her family went into New Charleston to be nearby when his sentence is carried out.  They are staying with George and Priscilla Hill.  They have two children:  Frederick and Alice.  Freddy and Sarah hit it off right away and continued to write each other after Sarah went home and then to school.  Sarah continued to help out the abolitionist (after her father’s death) with her maps.  She was able to draw accurate maps that the slaves could follow.  When they had to come up with a new way to do the maps, she drew them on doll heads.  During the Civil War, Sarah and her family move out west to Red Bluff, California (their family was not welcomed in the South or by the Confederate soldiers).

The Mapmaker’s Children tells Sarah’s and Eden’s stories.  It is interesting how the author is able to tie the current townspeople back to the past citizens of New Charleston.  I give The Mapmaker’s Children 4 out of 5 stars (I liked it).  It dragged in certain parts and at one point, I wanted to shake Eden.  Tell her to grow up and face reality (I got tired of her whining).  There is a lot more to the book.  I have only given you a brief synopsis.  It is well-written and engaging.  If the author had cut out the part of Jack “supposed” cheating and Eden’s whining, I would have loved it.

I received a complimentary copy of The Mapmaker’s Children from NetGalley and Blogging for Books in exchange for an honest review.  The review and opinions expressed are my own and not influenced by receiving the book for free.

I am off to watch Beauty and the Beast, Project Runway, Under the Dome, Mistresses, Big Brother, and Graceland.  Thursday is a busy television night.  Have a great evening and Happy Reading!