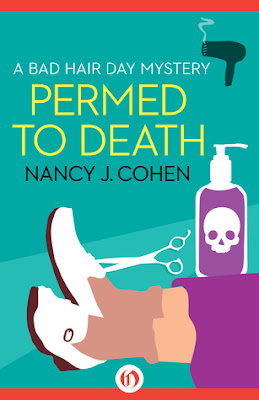 The beginning of a new week.  August is going by so fast.  I am taking it easy today.  Sunday is supposed to be a day of rest (whoever said that was not a woman)!

Permed to Death by Nancy J. Cohen is the first book in the Bad Hair Day Mystery series.  Marla Shore owns Cut ‘N Dye Beauty Salon in South Florida.  She opened up her shop two hours early to accommodate Bertha Kravitz.  Ms. Kravitz has been a customer for the last eight years.  She insisted she had to have a perm today for a special event.  Marla put her hair in rollers along with the solution.  Bertha insisted upon a cup of coffee (fresh) with powdered creamer (the only customer who uses it).  Marla then goes into the back for some supplies.  She hears a strangling noise and quickly returns to the front.  Bertha is slumped over and dead.  Marla checks for a pulse and smells something similar to marzipan (which is made from almonds).  Marla quickly calls the police.  Detective Vail shows up and starts asking questions.

Marla is upset to be questioned by the police because of an incident that happened when she was nineteen.  Marla also hopes that no one finds the envelope of photos that Bertha had and was using to blackmail Marla.  Marla is determined to find out who killed Bertha.  She feels it is her responsibility because Bertha was in her shop and she wants to save her reputation.  Marla sets off asking questions and finding out who wanted Bertha dead (it is not a short list).  Marla gets threatening notes, phones calls, and poisoned chocolates, but she persists (even after Detective Dalton Vail asks her to stop).  Dalton is interested in Marla, but they cannot date until after the case is closed (not that Marla is very encouraging).  Will Marla be able to stay alive (and out of jail) long enough to solve the case?  Who will get their hands on Marla’s photos and what type of photographs are they (I am sure we can guess)?

I have to give Permed to Death 3 out of 5 stars.  It is an okay book.  The one thing I did not like about the book was that the murder happens immediately.  I wish the author had built up the story just a little bit before killing off Bertha Kravitz.  I also did not really like Marla.  She does not come across as a likable person (I preferred the detective).  Marla is abrupt in her conversations and strings men along especially when she wants something from them.  The writing is just so-so in the book.  The mystery was very simple despite the author’s attempts to make it complicated (it just did not work).  Some of the other books in the series are:  Highlights to Heaven, Died Blonde , Dead Roots, Perish by Pedicure, and Killer Knots (all are available on Kindle Unlimited including Permed to Death).  There are more books in the series (I was shocked).

I received a complimentary copy of Permed to Death from NetGalley in exchange for an honest review.  The review and opinions expressed are my own.

I am currently reading Eeny Meeny by M.J. Aldridge (a British suspense novel).  Have a nice, relaxing day and Happy Reading!

Posted by Kris Anderson, The Avid Reader at 3:19 PM