A Case of Syrah, Syrah: A Wine Country Mystery 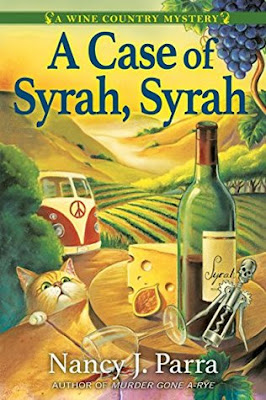 Thank you for visiting today.  I know how hectic it is this time of year.  If you are looking for an entertaining Amish romance novel, I suggest picking up Courtship on Huckleberry Hill by Jennifer Beckstrand.  It is the eighth book in The Matchmakers of Huckleberry Hill series and will be released on December 26.

A Case of Syrah, Syrah by Nancy J. Parra is the first in A Wine Country Mystery series.  Taylor O’Brian has returned to Sonoma, California and is living in pool house at her Aunt Jemma’s place called Sookie’s Vineyard.  Taylor has decided to start Taylor’s Off the Beaten Pat Wine Country Tours.  Her first tour is for Laura Scott and her employees for a team building day.  Taylor is setting out lunch for the group and it is mentioned that Laura is missing.  A search ensues, and Taylor finds Laura near a stream down a cliff.  Despite being warned by the 911 operator to not go down the cliff, Taylor scrabbles down along with Laura’s husband, Dan to check on Laura.  Laura Scott is dead with Taylor’s missing corkscrew in her neck.  Sheriff Ron Hennessey is in charge of the investigation and quickly narrows his sights on Taylor.  Patrick Aimes, Taylor’s attorney, warns her to not talk to anyone regarding the case and keep a low profile.  However, Taylor’s new business venture is in jeopardy along with Aunt Jemma’s winery.  Aunt Jemma states that they need to find the culprit on their own.  Taylor starts nosing around, but then the investigation gets derailed when an arrest warrant is issued.  Someone is setting up Taylor to take the fall for Laura’s murder.  Out on bail, Taylor continues her quest for the killer.  Then Taylor finds another victim and her puppy, Millie is kidnapped.  Will the killer be caught before Taylor gets prosecuted?
A Case of Syrah, Syrah is easy to read, has a lovely setting of Sonoma (California) and an adorable cover.  I did find the pace a little slow in the beginning.  There is an abundance of speculation and inept questioning by Taylor (she ends up angering people).  The author did not take the time to properly develop the characters (or tell us much about the town).  I found Taylor a hard character to like.  She is irresponsible, impulsive, does not think things through, and ignores counsel from others (I found her annoying and a danger to others).  I do not know why she bothered to retain an attorney if she was going to continually ignore his advice (seems a waste of money).  Taylor got into one ridiculous situation after another throughout the book.  While she does have these traits, Taylor is otherwise very bland (lackluster). Part of the problem is readers are not told what Taylor is feeling.  I am giving A Case of Syrah, Syrah 3 out of 5 stars.  There are two mysteries in the story.  The murder and an identity theft problem.    Master cozy mystery sleuths will find solving this one effortless, while others will be surprised when the solution is revealed.   There are two possible love interests for Taylor who are (of course) handsome (let us hope this does not mean a love triangle in future books).  There will be a twist to Taylor’s tours in the future that I found intriguing. A Case of Syrah, Syrah will appeal to cozy mystery readers who prefer light, humorous cozy mysteries.

Tomorrow I will be sharing my review of The Ladies of Ivy Cottage by Julie Klassen.  It is the second book in Tales from Ivy Hill series.  By the way--How did Santa do at the comedy club?  He sleighed everyone!  I hope that you have a fabulous day.  Take care and Happy Reading! 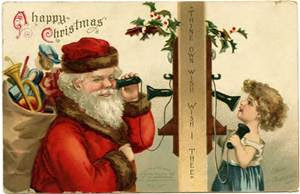