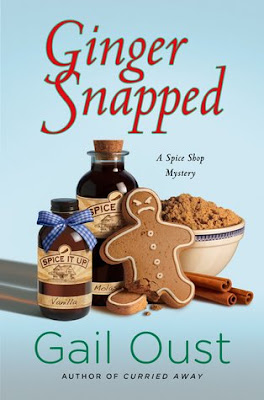 Hello!  Another One Bites the Crust by Ellie Alexander will be released on January 2.  It is the seventh book in A Bakeshop Mystery series.  Amish Sweethearts by Amy Clipston will be published on January 9.

Ginger Snapped by Gail Oust is the fifth book in A Spice Shop Mystery series.  Piper Prescott owns Spice It Up! In Brandywine Creek.  It is April and Melly Prescott, Piper’s former mother-in-law, is getting married to Judge Cottrell Herman.  Love has mellowed Melly and changed the relationship between the two women.  During the wedding, Sgt. Beau Tucker and John Strickland (the coroner) get phones calls and rush off.  After the wedding, Piper finds out that a body was found in Sheriff Wyatt McBride’s pond.  Piper rushes over to his home worried about Wyatt (Piper is attracted to him).  It turns out that local realtor, Shirley Randolph is the victim.  Since Wyatt had been seen with Shirley recently, he is a prime suspect.  Wyatt is suspended, and Beau Tucker is made interim sheriff.  To clear Wyatt’s name and get him reinstated as sheriff, Piper along with Reba Mae and Wyatt explore Shirley’s life to see who could have wished her harm.  Piper realizes she is close to the truth when someone runs her off the road one night and then breaks into her home.  What was the killer looking for in her home?  The culprit is setting up Wyatt to take the fall, and Piper is not going to let it happen.
Ginger Snapped is a light, humorous cozy mystery.  I found it nicely written with a steady pace that made it easy to read.  Gail Oust shows what life is like in a small, Southern town where everyone knows your business, gossip abounds, nepotism is alive and thriving, and the people are friendly (and very nosy).  The jealousy, flirting and attraction between Wyatt and Piper was prevalent throughout Ginger Snapped.  While Ginger Snapped is the fifth book in A Spice Shop Mystery series, it can be read alone.  The author provides the necessary background on Piper, the spice shop, the town and secondary characters.  We get to experience Piper’s life at the shop and with her family.  I am not a fan of Piper’s ex-husband and his new wife.  They are annoying and hinder my enjoyment of the story.  I keep hoping that CJ will become the killer’s next victim (and Amber will get eaten by a shark).  The investigation consists of Piper asking questions and nosing around the victim’s home with Reba Mae (who is in love with victim’s closet of clothes and shoes).  When the killer’s identity is revealed, most readers will not be surprised.  The why, though, takes a little longer to figure out.  I appreciated the description of the spice shop and the information on ginger (it was interesting). Readers who enjoy hilarity, hijinks and homicide in a small Southern town, pick up a copy of Ginger Snapped.  The first four books in A Spice Shop Mystery series are Rosemary and Crime, Kill 'Em with Cayenne, Cinnamon Toasted and Curried Away.

I hope you found my review helpful.  I will be showcasing As Bright As Heaven by Susan Meissner tomorrow.  Why are Christmas trees like bad knitters?  They both drop their needles!  I hope that you have a jolly day.  Take care and Happy Reading! 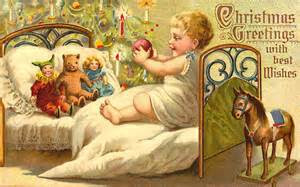