Kappy King and the Puppy Kaper: An Amish Mystery 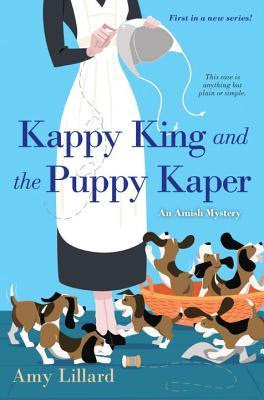 Happy New Year's Eve!  The last day of 2017. I plan an exciting evening of reading and relaxing with my sweet fur babies huddled nearby (thanks to fireworks). The Orphan Girl by Lindsey Hutchinson (historical fiction) will be published on January 1 along with It's Tutu Much by Lorraine Bartlett.  A Daring Escape by Tricia Goyer will be available on January 2 along with Scones and Scoundrels by Molly MacRae, Another One Bites the Crust by Ellie Alexander, and Dial M for Mousse by Laura Bradford.


Kappy King and the Puppy Kaper by Amy Lillard is the first book in An Amish Mystery series.  Kathryn “Kappy” King lives alone making kapps for the women of her community in Blue Sky, Pennsylvania.  Kappy arrives home from shopping to find her front door painted blue which implies an available maidel lives here.  Kappy knows instantly that Jimmy Peachey, next door neighbor’s son with Downs syndrome, painted her door and heads over to talk with him.  She finds Jimmy in the barn crying with his mother, Ruth dead on the floor.  When the police arrive, they arrest Jimmy.  Detective Jones states that Jimmy confessed to the crime.  Edith “Edie” Peachey, Jimmy’s shunned sister, returns to town determined to find her mother’s killer and get Jimmy released from jail.  Since the Amish will not speak with Edie, she asks Kappy to assist her.  The pair start questioning the neighbors and then Ruth’s business acquaintances (dog breeder) hoping for clues that will lead them to the killer. Then the Mifflin County Animal Welfare arrives thanks to an anonymous complaint that they are running a puppy mill on the property.  The next day animal rights activists arrive.  This is just the beginning of a series of incidents.  Who is doing this to them and why?   Kappy and Edie need to work quickly before things turn deadly.

I enjoy reading Amy Lillard’s Amish novels and was eager to read her new Amish mystery.  However, Kappy King and the Puppy Kaper missed the mark.  I found the book easy to read and it had a nice flow.  The characters, though, lacked development.  In a way, Kappy and Edie reminded me of Laverne and Shirley with their antics (but not as humorous).  It is mentioned that Kappy is eccentric, but I could not figure out why (except her how she conducted her business).  Edie was the unconventional one especially with her manner of dress.  I am thankful that the zany is mild and not over-the-top.  Identifying the killer and the person behind the destructive incidents is child’s play.  The book needed more substance and a feeling of community. Readers are given few details on the town.  We are told about Hiram Lapp who owns Sundries and Sweets.  Kappy was engaged to Hiram, but she recently broke it off with him (and I can see why with his dominating ways).  Kappy feels she is unworthy of Hiram.  Hiram talks several times to Kappy to get her to reconsider her decision as well as trying to deter her involvement in the investigation.  There was also some flirting between Detective Jones and Edie.  Jimmy was a sweetie along with the cute puppies (and the other adorable animals).  There is a preview of Kappy King and thePickle Kaper at the end of the book which will be published on June 26, 2018.  Readers who are looking for a light, amusing cozy mystery should take check out Kappy King and the Puppy Kaper.

Thank you for taking time out of your day to read my latest review.  May each of you have a pleasant and safe New Year holiday.  I will return on January 2 with my thoughts on Another One Bites the Crust by Ellie Alexander.  Take care and Happy Reading!