A Daring Escape: The London Chronicles 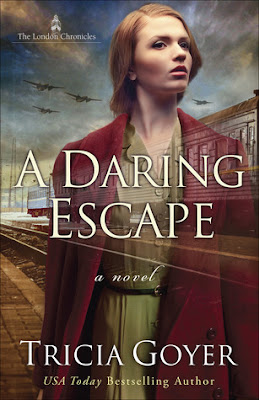 Hello! The King of Bones and Ashes by J.D. Horn will be available on January 23.  It is the first book in A Witches of New Orleans series.   J.D. Horn is the author of The Line, The Source and The Void  (A Witching Savannah series).


A Daring Escape by Tricia Goyer is the second book in The London Chronicles series.  Amity Mitchell is a tutor to Celia Cartwright in London in 1938.  Amity enjoys her position in the Cartwright household.  Clark Cartwright, a widower and author, is grateful to Amity for helping him and Celia overcome their grief (from the death of his wife, Gwen) and move forward with their lives.  It is almost time for her Christmas break, when Amity receives a telegram from her brother, Andrew.  Andrew works for the British Home Office overseeing immigration to the United Kingdom.  He is in Prague and needs Amity’s assistance with Jewish children.  The Nazi’s will be moving into the area and soon it will be impossible to get these innocent children out of the country.  Amity agrees to go for her two-week leave, though, she will miss spending Christmas with Clark and Celia.  She is soon absorbed in helping the children and extends her stay.  Clark and Celia miss Amity and Clark soon heads to Prague to tell Amity how he feels about her (and convince her to return home). They work to get the children out on Kindertransports, but then the Nazi’s invade.  Amity is on their radar and her American passport will not be able to protect her.  She refuses to leave with Clark wanting to save as many children as possible.  Amity also wants to ensure that Pavla Simonova and her children out on the next train (which could very well be the last one).  Konrad Hanak, a Nazi soldier, is after Pavla for information.  He will not let anyone stand in his way.  Will Amity make it out Czechoslovakia before it is too late?

A Daring Escape is a well-written historical, Christian novel.  While A Daring Escape is the second book in the series, it can be read alone.  The pacing is good and smooth transitions between chapters.   I like how the author incorporated the historical elements into the story.  It is obvious that the author did extensive research for this novel.  She included the historical data without making it seem like a history text or lecture.  It blends smoothly into her fictional story. The characters are nicely developed, likeable and realistic.  Amity is a strong female character who wishes to help others.  She is brace, determined and tenacious.  Clark was a resilient, thoughtful, and caring man. Andrew is a minor presence in the book (I hope he gets a book of his own).  There are basically four storylines (Amity, Clark, Pavla and her family, and Konrad Hanak) that come together for one compelling novel.  I appreciated that the author did not just make this a historical romance.  I liked the mystery/suspense that came with Pavla Simonova and the treasure storyline.  It added an extra element that enriched the story.  Imagine how heartbreaking it was for parents to send their children away knowing that the chances of ever seeing them again was unlikely.  Just another thing taken away from the Jewish people (along with their jobs, homes, valuables, identities, religion, dignity and their lives).  The Christian elements included faith, power of prayer, trusting in God, and scripture.  Ms. Goyer takes her readers back in time to a horrific period in history.  You will be able to visualize the characters in the scenes in your mind.  I am eager to read more novels by Tricia Goyer.  The first book in The London Chronicles series is A Secret Courage.

Thank you very much for reading my review.  I will return on January 6 (Epiphany) with my thoughts on Out of the Ashes by Tracie Peterson and Kimberley Woodhouse.  It is the second book in The Heart of Alaska series.  Back to my repair work.  Take care and Happy Reading!