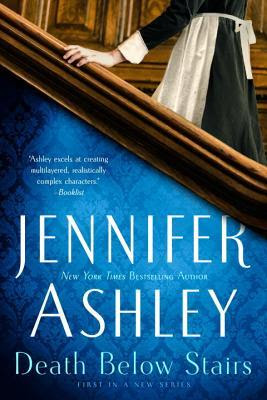 Welcome!  Hattie's Home is a new historical novel by Mary Gibson.  Readers get to join Hattie Wright on her journey after World War II. If you like to read historical fiction, check out Hattie's Home.


Death Below Stairs by Jennifer Ashley is the first installment in A Below Stairs Mystery series (also called Kat Holloway Mysteries).  Mrs. Kat Holloway is twenty-nine years old and a cook in London (1881).  She has just obtained a position at Lord and Lady Rankin’s home in Mayfair.  Kat comes down to work the next morning to discover her assistant dead in the larder.  Kat sends for the mysterious Daniel McAdam to assist her in uncovering what happened to the poor girl.  The eccentric Lady Cynthia (Lady Rankin’s sister) joins them on their quest to discover what happened.  It seems that Kat’s assistant had gotten herself involved with the wrong people.  What had the young woman come across that got her murdered?

Death Below Stairs had my attention for the first couple of chapters, but then it became tedious (I wish the whole book had been like the beginning).  The author is overly descriptive.  Every little detail is provided.  It does create a rich environment (reminds me of the show Upstairs Downstairs).  Readers are given detailed accounts of clothing, how Kat sharpened her knives (more than once), how Kat prepares each dish, description of rooms, people, buildings, etc.  The pace was glacial, and the book did not hold my attention.  The murder mystery was interesting, but it was not the main focus of the book.  The mystery took them into the world of the Fenians.  I found some parts of this section to be implausible.  I believe many people will be surprised by the killer’s identity.  I was curious how Kat was able to run around looking for a killer.  Most cooks are busy from the moment they enter the kitchen in the morning until late at night.  Kat, who just started her position, manages to run around London and then take several days off in the pursuit of answers.  It was also odd that she never consulted the lady of the house regarding meals.  Most cooks met once a week with their employer to discuss the meals for the upcoming week (food had to be ordered by the housekeeper).  Kat is an interesting character.  She has a secret that could ruin her and her career.  Daniel McAdam is an enigma.  We are given scant details on him.  After I began Death Below Stairs, I felt I was missing something.  It did not feel like the first book in the series.  After a little research, I found that there is a prequel titled A Soupcon of Poison.  Events from the prequel are alluded to in Death Below Stairs.  Death Below Stairs felt more like a romance novel (at times) than a mystery.  Kat and Daniel are attracted to each other. We get to hear how attractive Daniel is and how his kisses make her “lips tingle” (many, many times).  The author tried to put too much into this one book.  I wish she had stuck with the murder mystery and excluded the plot to eliminate Queen Victoria and the Fenians. The next book in A Below Stairs Mystery series is Scandal Above Stairs (07/03/2018).

I appreciate you visiting today.  I will return tomorrow with my review of The Lacemaker by Laura Frantz.  May you have a blissful day.  Take care and Happy Reading!