A Song Unheard: Shadows Over England 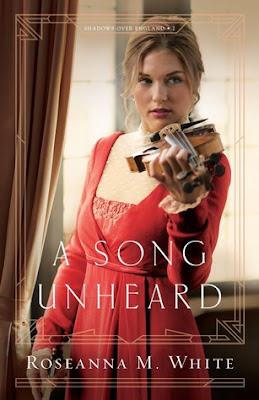 A Song Unheard by Roseanna M. White is the second book in Shadows Over England series.  Willa Forsythe is a thief in London in 1914.  Her skills are an asset to the government.  Her latest assignment is to obtain a cypher key from Lukas De Wilde, a Belgian immigrant and violinist.  Lukas is currently with other Belgian refugees making up the Belgian Symphony Orchestra which is raising money for the Belgium Relief Fund.  Lukas is worried about his mother and sister who are still in Belgium.  Lukas was shot when he escaped because the German’s want details on his father’s work in the field of cryptography.  It is rumored that his father had a device that would revolutionize the field.  He needs to get them out of Belgium before they are captured.  Lukas is intrigued by Willa and her natural ability with the violin.  Willa is attracted to Lukas, but she knows she must betray his trust.  Then Willa notices someone following Lukas.  She must find that key, but what will it cost her?

A Song Unheard has great characters that are well developed.  The book contains good writing, but the pace is slow in the first half.  A Song Unheard can be read alone.  You do not need to read A Name Unknown (which tells Rosemary’s story).  The author captured the time-period and area (Wales, London, Belgium).  Cryptography is fascinating, and many new developments were made during World War II.  Ms. White described cyphers and how they created/used in terms that a layman can understand (and did not make it boring).  I did have trouble getting into the novel.  The first half of the book could have used some fine tuning.  The pace, flow and action pick up during the second half.  It held my attention, and I was curious to discover what would happen next.  The POV switched between Willa, Lukas and Margot (Lukas’ sister).  We get to see how each character feels and what they are thinking.  I liked the spunky and intelligent Margot.  The Christian elements are incorporated nicely into the story (finding God, being a good Christian, having faith, trusting God).  Readers of historical fiction will be delighted with Willa’s story in A Song Unheard. The next book in Shadows Over England series is Barclay's story in An Hour Unspent.

Thank you very much for reading my latest review.  I will return tomorrow with Hearts on the Road by Diana Lesire Brandmeyer.  A Christian romance novel set during 2009.  I will be featuring Amish Sweethearts by Amy Clipston on January 9.  Take care and Happy Reading!