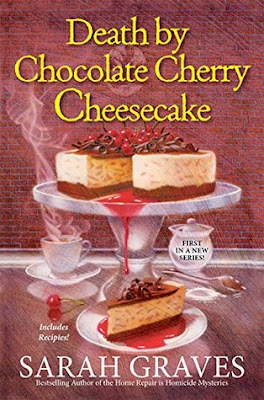 Death by Chocolate Cherry Cheesecake by Sarah Graves is the first book in A Death by Chocolate Mystery series.  Jacobia “Jake” Tiptree co-owns The Chocolate Moose in Eastport, Maine with her best friend, Ellie White.  They have agreed to make a dozen chocolate cherry cheesecakes to be auctioned off by the Coast Guard to pay for the town’s fireworks.  Jake received an early morning call from Miss Halligan who owns Second Hand Rose that the door to the chocolate shop was ajar.  When Jake arrives at The Chocolate Moose, she finds Matt Muldoon dead in the kitchen with his head in a pot of melted chocolate (what a waste of good chocolate).  Matt had been trying to get the ladies out of their shop with baseless (and ridiculous) accusations that he would report to the health department as violations.  Ellie is at the top of the suspect list thanks to her recent altercation with the victim.  Jake needs to prove that Ellie is innocent of the crime while trying to get the cheesecakes baked in time for the auction without their commercial ovens.  Then they discover a hurricane is heading towards Maine, and they need to batten down the hatches.  Jake is also worried about her son, Sam who failed to arrive home from Boston (afraid he fell off the wagon) and her father who has left the hospital against medical advice (and he refuses to stay in bed).  Even with a hurricane heading their way and the threat of Ellie being arrested, they must get the cheesecakes done.  Thanks to overwhelming demand, they now need to make twenty-eight instead of twelve (the town is not canceling their Fourth of July celebration).  Can Jake prove that Ellie did not kill Matt Muldoon?  Will they get the cheesecakes done in time for the auction?

Death by Chocolate Cherry Cheesecake is the first book in A Death by Chocolate Mystery series, but it is technically a continuation of A Home Repair is Homicide Mystery series (there are sixteen books in that series).  I was not aware of this until I started the book, and I felt like I had been plopped into the middle of a series.  I wish the author had taken the time to introduce her readers to her characters in the beginning of the book, because I felt lost and confused.  We are given more details on the characters as the book progresses (thankfully).  However, I never fully connected with the characters and I felt out of step (there were still holes not filled in).   Death by Chocolate Cherry Cheesecake is packed full of action.  There is one situation after another throughout the story.  The action starts with the murder in the first chapter, then Jake and Ellie almost get hit by another boat when fog strands them in the water, Jake’s father disappearing from hospital, Jake’s father takes off with car (and with his medications, he should not be driving), Marla and her dog attacked, lack of chocolate to make cheesecakes, Jake and Ellie breaking into Marla’s house, someone shoots at the duo, Sam is missing, Hurricane Amber and so much more.  I wish the author had cut down on the zany incidents.  It was too much and I beginning to wonder if Jake had a death wish.  I wanted more solid content.  I did find some aspects of the book to be unrealistic.  Most mystery readers will have no problem figuring out the identity of the culprit long before it is revealed in the book.  There is a repetition of information in the story especially regarding the stepmom’s attitude towards cleaning (the same details are repeated over and over).  I know it is a culinary mystery, but the author did not need to include so many scenes on the baking of the cheesecakes.  The ending felt rushed (take away a baking scene and the ending could have been less abrupt).  For readers who love Sarah Graves A Home Repair is Homicide Mystery series, you will enjoy the continuing antics of Ellie and Jake.  Death by Chocolate Cherry Cheesecake will be published on January 30.  Readers can follow Sarah Graves on Amazon and Facebook.

I will return on Monday with my thoughts on Survival of the Fritters by Ginger Bolton.  I hope that you have a pleasant weekend.  Take care and Happy Reading! 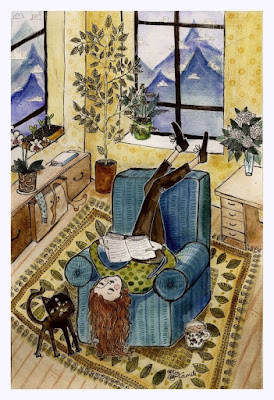