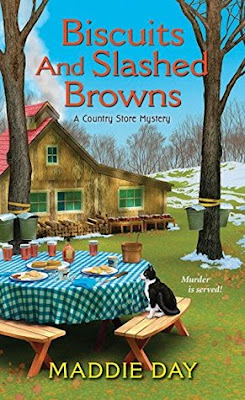 Happy Book Release Day!  A few of the new releases include Survival of the Fritters by Ginger Bolton, Lethal Tide by Beth Prentice, Curses, Boiled Again by Shari Randall, Lies that Comfort and Betray by Rosemary Simpson, The Phantom of Oz by Cindy Brown, Death by Chocolate Cherry Cheesecake by Sarah Graves, Class Reunions are Murder by Libby Klein, Perish by Lisa Black, Biscuits and Slashed Browns by Maddie Day, Murder Borrowed, Murder Blue by Stephanie Blackmoore and Liza's Second Chance by Molly Jebber.  I hope you find some new books to read.

Biscuits and Slashed Browns by Maddie Day is the fourth book in A Country Store Mystery series.  Robbie Jordan owns Pans ‘N Pancakes in South Lick, Tennessee.  It is March and time for the Fifth Annual Brown County Maple Festival.  Robbie has arranged for a breakfast cook off to be held at her restaurant and Robbie will be making her maple biscuits.  Professor Warren Connolly is one of the judges for the contest, but several people are not happy with him.  Robbie witnesses him having a disagreement with Professor Sonia Genest and Dr. Sajit Rao.  The next morning Warren is found dead by the sugar shack on the Rao’s maple farm.  The murder weapon turns out to be one of Christina James’ Tojiro knives.  Christina is Robbie’s best friend and she has an excellent motive for wishing harm to come to Warren.  Robbie knows that her friend did not kill Warren and sets out to find the culprit.  The suspect list is quite long since Warren seemed to make enemies wherever he ventured.  Then Robbie’s prime suspect, Sajit goes missing.  While searching for Sajit, Robbie stumbles upon an illegal venture.  Will Robbie find the killer, or will she end up the next victim?

Biscuits and Slashed Browns is well-written and entertaining.  The book was easy to read and had a good pace.  The characters are well-developed, colorful and relatable (they will remind you of your family and friends). I appreciate that the author includes characters of various ages and nationalities.   I enjoy the great small-town locale.  While Biscuits and Slashed Browns is the fourth book in the series, it can be read alone.  The author provides readers with Robbie’s history and touches on past storylines.  There is a dash of romance which plays out softly in the background.  I like that Abe supports Robbie in her sleuthing (though he does worry about her).  The mystery was nicely woven into the story, there are several suspects and the author provided good clues to aid readers.  I love the vintage implements featured in the story.  The cozy elements include family, friends, the making of maple syrup, cooking, Southern colloquialisms, humor, romance and a smidgen of jealousy.  There are recipes included at the end of the book.  Biscuits and Slashed Browns is my favorite book in A Country Store Mystery series.  Death Over Easy is the next book in this series and it will be available on July 31.

I appreciate you visiting today.  Tomorrow I will be featuring Lies that Comfort and Betray by Rosemary Simpson.  Take care and Happy Reading! 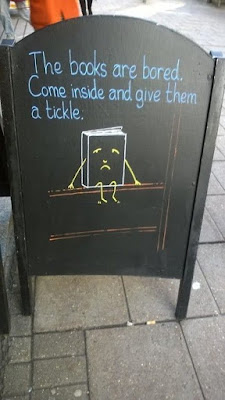