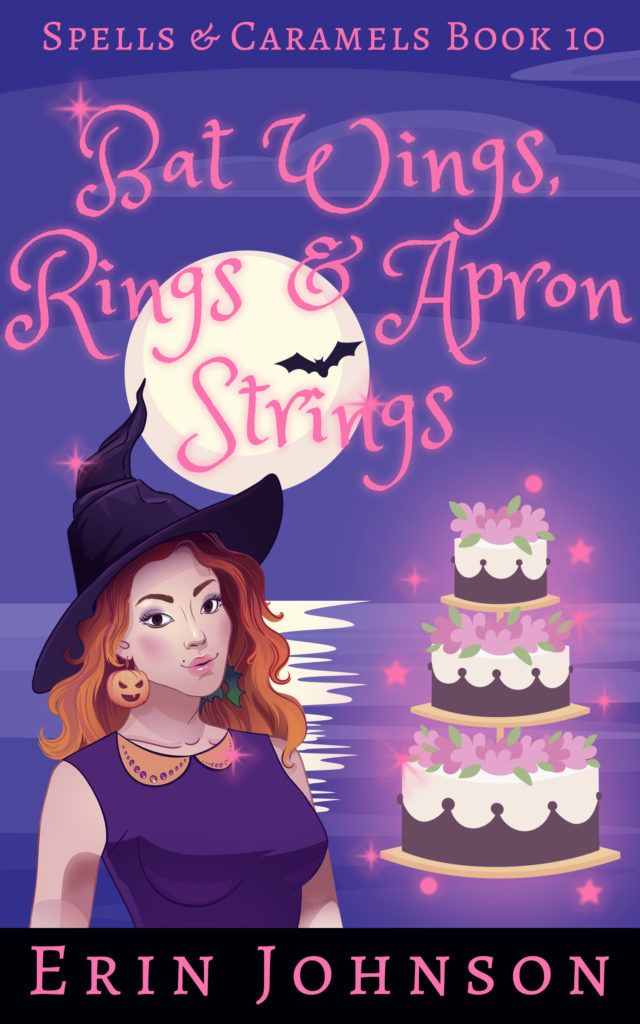 A delicious wedding. A sour and supernatural curse. Will this baker's next bite be her last?

With her wedding to Hank fast approaching, Imogen Banks has come a long way from the magical contest that brought her to Bijou Mer. But when conspirators seek to sabotage the witch's big day, she fears her latest recipe for happiness will end in disaster. And after the prince falls horribly ill, Imogen and her friends must solve one more dark mystery before her love and kingdom perish.

Speeding through a menu of suspects as long as the guest list, Imogen clashes with a vengeful monarch and a calculating assassin. But as the minutes tick down to seconds, saving her home and her fiancé may require walking away from everything she loves.

Can Imogen create one final concoction to stop a war and marry her soul mate?
Bat Wings, Rings and Apron Strings is the magical conclusion to the Spells and Caramels cozy witch mystery series. If you like witty characters, mystical intrigue and a dash of romance, then you’ll love Erin Johnson’s tasty whodunit.

Erin Johnson is a native of Tempe, Arizona, Erin spends her time crafting mysterious, magical, romance-filled stories that’ll hopefully make you laugh. In between, she’s traveling, napping with her dogs, eating with her friends and family, and teaching Pilates (to allow her to eat more).  Readers can follow Erin on Facebook and Twitter.  Visit the website for more information on her books, the author and read her blog. 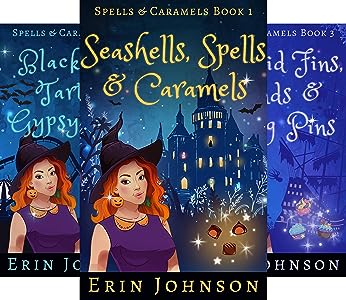 Bat Wings, Rings and Apron Strings is (sadly) the last book in the Spells & Caramels series.  This series does need to be read in order as each book builds upon the previous one.  Imogen grew up believing she was human and only discovered she was magical when she entered an unusual baking contest.  The contest led her to Bijou Mer where she learns magic is real and that Imogen has special powers as a swallow.  Imogen met Hank during the contest and only later learned he was Prince Harry.  Imogen’s adventures have taken her to the various kingdoms (Air, Water, Fire) and eventually the group found themselves stuck in the Badlands where she learns Horace is her brother.  Just when they settle down in their own home and bakery, they are found by Amelia and asked to return.  Hank and Imogen’s wedding is needed to boost morale and reunite the kingdom’s after King Roch’s terrible deeds have split them apart.  I liked that the various characters from the past books make appearances.  Everything has come full circle.  Bats Wings, Rings and Apron Strings is well-written and the story gallops along at a fast clip.  Erin Johnson has crafted delightful characters and unique worlds that I will miss.  She is so creative with her worlds and her word imagery brought the stories alive for me.  The mystery takes Imogen on quite the adventure.  There are good clues to help them (and us) solve the case.  The ending is clever and humorous.  Iggy’s commentary will have readers chuckling.  My favorite line from Iggy is “no wedding would be complete without your chaotic terrorist brother”.   Another good one is “that’s miss whatsherface to you!” as Iggy defends Imogen.  The mermaids provide additional laugh out loud moments.  I will miss Imogen, Prince Hank and especially Iggy.   Bats Wings, Rings and Apron Strings has mystery, friendship, humor, suspense, love, unique worlds, magic and delightful characters.  Erin Johnson has provided readers with an enchanting ending to the Spells & Caramels series. 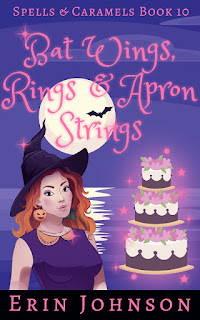 April 8 – Cozy Up With Kathy – SPOTLIGHT