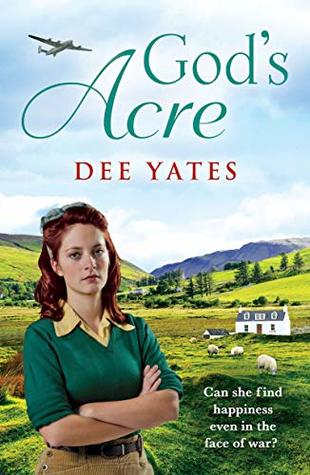 Welcome!  Dee Yates was born and brought up in the south of England.  Dee is the eldest of nine children.  She moved to Yorkshire to study medicine and remained there working in well woman medicine as well as general practice.  Dee retired in 2003 to start writing.  She wrote two books within three years.  In 2007, Dee moved further north to the Southern Uplands of Scotland.  She has three daughters and three grandsons.  Dee Yates likes to spend her time with her grandchildren, gardening, walking, reading, and helping at the local museum, church and school library.  She writes historical fiction, poetry, and recently non-fiction.  Dee's youngest sister is Sarah Flint who writes crime with blood-curdling descriptions that make Dee want to hide behind the settee.  Dee has written A Last Goodbye, The Railwayman's Daughter, and A Yorkshire Lass. 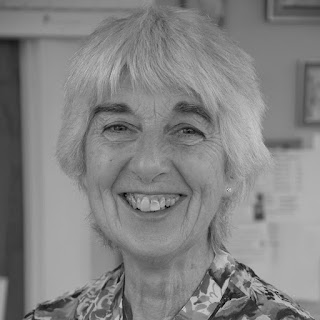 God’s Acre by Dee Yates takes readers to Scotland.  Jeannie McIver is a seventeen year old currently living with her aunt and uncle in Glasgow while working at Clydebank Library as a library assistant.  Her father wishes her to return home, but Jeannie has other ideas.  She signs up for the Women’s Land Army to be a Land Girl.  Jeannie has lived around farms her whole life and she prefers to be outdoors than cooped up inside.  She finds herself assigned to Blackford Farm in County of Lanark with the Cunningham family.  Rob and Agnes Cunningham along with their son, Neil raise sheep, have milk cows and grow a few basic crops.  Jeannie is working sunup to sunset around the farm and loving every minute of it.  While at the market one day, Jeannie runs into Tam McColl who lives on a neighboring farm.  Jeannie and Tam fall in love, but there are others competing for Jeannie’s attention and would like to come between the young couple.  Tam tends to keep his thoughts and feelings to himself which is challenging to Jeannie.  One decision by Jeannie changes the course of their lives forever.

God’s Acre is a unique novel in that the story is told from different points in time.  Liz Deighton in 2002 buys a cottage and finds a picture of her mother inside.  She knows her mother spent time in the area long ago and looks to obtain more information.  We also get to learn what prompted Liz to move to Scotland.  The last thing Jeannie McIver wishes to do is move back home.  Her father is overbearing and dogmatic.  Jeannie enjoys being outdoors and when she sees the advertisement for Land Girl’s, it seems like it a sign.  She is soon enjoying farm life and the comfort of the Cunningham’s home.  Rob and Agnes are kind people who make Jeannie feel welcome.  She is drawn to Tam McColl from the moment they bump into each other in town.  But the road to happily ever after is a bumpy one especially with a war raging on.  Dee Yates is a descriptive writer which helps bring the story alive.  It allows readers to visualize the scenery and the characters.  The book proceeds at a thoughtful pace which picks up in the second half.  I could feel the emotions of the characters.  The feelings of loneliness, joy, sadness, grief, love and anger poured out from the pages.  I did find it disconcerting as we jumped from character to character and to the various time periods.  It made it hard to get into the story in the beginning.  Once everything started coming together, it was easier to stay absorbed in the God’s Acre.  I found that I preferred the historical sections with Jeannie the best.  Jeannie’s story had me reading quickly to learn what happened to her. One phrase really captured the story—“God Works in mysterious ways”.

Here is an excerpt from God's Acre for you to enjoy:

The name Cunningham in the local telephone directory fills half a page. She runs her finger down the list, checking addresses. ‘Outside the village’ the estate agent had said. Did he mean just outside or in a different area altogether? There is no way of telling. All she can do is ring each of the numbers in turn until she finds the person she is searching for.

Her phone calls draw a blank. Her enquiries are met either with an apology that he or she is not the person she is looking for or with a recorded message to ring back later. In several cases the phone rings and rings and no answering voice comes to her aid. She makes a note of those numbers and sits back, frustrated that she is no further forward.

Having little else to do, Liz decides to pay another visit to the village, to recapture the excitement that has now been dimmed by the impersonal surroundings of the hotel in which she has chosen to stay.

A raw wind is gusting through the valley as she walks slowly downhill past the cottage. She gazes at its forlorn appearance, hunkered down against the weather, and the windows stare back blindly, their glass, filmed with dust, having the appearance of elderly cataracts. By the time she has reached the river, her fingers are numb, and the air is full of starved snowflakes. It is no day for enjoying the environs of the village and, turning, she makes her way briskly up the hill. By the time she reaches the pub, her cheeks are glowing, and blood is beginning to flow back into her deadened extremities, giving her hot aches.

‘Not a day to be out and about if you can help it,’ the landlord says unnecessarily, as she climbs onto a bar stool. A fire burns in the grate and the small room exudes cosiness.

She smiles at him through the pain of her fingers and looks round the empty room. ‘It looks as if all your customers have decided to stay at home.’

‘Och! It’s always quiet the noo.’ He glances at the clock on the wall. ‘See, there’ll be one or two in shortly on their way back from market. Or they’ll call in to get warm after a morning on the hill checking sheep. Now, what can I get you, hen?’

‘I’ll have half a lager and lime, please.’

‘Coming up.’ The landlord takes down a glass from the shelf above the bar. ‘You’re not from round these parts, are you?’

‘No, but I’m hoping that I will be shortly. I’m planning to buy in the village.’

‘You mean the cottage down the hill?’ He looks at her as though her brain has become slightly unhinged. ‘You’ll have your work cut out with that one.’

‘It does need a bit doing with it, I’ll grant you that.’

A draught of cold air heralds the entrance of someone else seeking warmth or sustenance, or both. Liz turns. The man is late middle-age, with a face scoured and stained by a life lived outdoors. He wears waterproof jacket and trousers and smells unmistakably of sheep.

‘A good morning at market, Alastair?’ the landlord asks, reaching down a pint glass and tilting it to accept the steady black stream of Guinness.

‘No’ so bad.’ The newcomer rubs gnarled hands together to warm them. ‘Better inside than out on a day like today.’ He turns to Liz and nods. She smiles back and takes a sip of her lager.

‘This young lady’s thinking of moving into the village… buying the cottage down the hill.’

‘Neil’s decided to sell then, has he? Can’t say that I’m surprised. Tam’s been gone a few months. After all, it was built as a farm labourer’s cottage and there aren’t the farmhands needed now… and not likely to be. There’ll be more and more of these labourers’ cottages up for sale. Just so long as the people buying them aren’t going to leave them empty as holiday homes while they go and stay in the big city.’

‘Nothing like that', says Liz. 'That way leads to the death of a community. No, I’m determined I’m going to live in mine and make my home here. Er, Tam, you said, used to live there. Did you know him? What was he like?’

Alastair turns his mouth down at the corners. ‘Old Tam? I didn’t know him well… nobody did. Bit of a loner, he was… a proper old bachelor. Looked after himself all the time that I knew him. His father used to farm where I am now. I came from a neighbouring village and took over the tenancy not long after the old man died. Well, I say “old”, but to be honest he wasnae that old. Tam, now, he became a bit of an odd-job man – some farm labouring, some tending gardens round the village. Oh, and he used to help the gamekeeper out at busy times of the year.’

‘Did Tam have no family at all, then?’

The farmer is quiet for a minute, thinking. ‘I heard there was an older brother – Alan, I believe they called him.’ He takes a sip of his Guinness and runs his tongue across his upper lip to remove the moustache of froth.

Did the excerpt from God's Acre appeal to you?  God's Acre is available at Amazon, Kobo, Google Play and iBooks.  Thank you for joining me today.  I will be reviewing The Witch of Willow Hall by Hester Fox.  It is a book that I did not get to read when it was released.  May you have a day filled with happiness (something we all deserve).  Take care of yourself and Happy Reading! 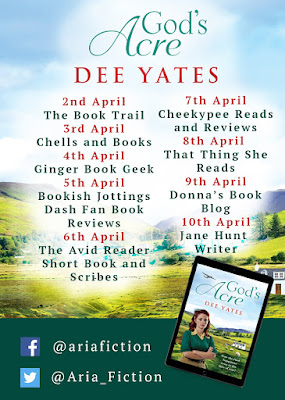