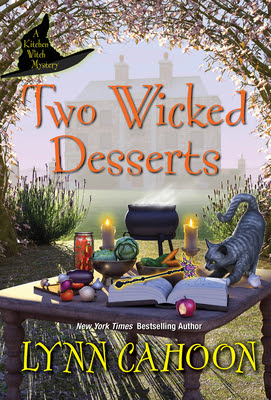 Mia Malone conjures up delicacies while casting about for clues in New York Times bestselling author Lynn Cahoon's Two Wicked Desserts, continuing her Kitchen Witch Mystery series...
Magic Springs, Idaho, may be a small town, but Mia Malone is living an enchanted life running her own catering business and cooking school. And while she's teaching the locals culinary craft, her grandmother is teaching her witchcraft for the day she inherits the family magical spells that have been passed down for generations. Unfortunately, all that knowledge is not helping Mia or her grandmother in removing the spirit of warlock Dorian Alexander from Mia's cat Mr. Darcy.
But even though Dorian hasn't yet left this earthly plane, his spells have already been transferred to his daughter Cindy's grimoire. An actress looking for her big Hollywood break, Cindy is hoping there's something in her father's bag of tricks to make her a star. But playing with magic has only resulted in a trip to Idaho where Cindy finds herself the number one suspect in the murder of a hitman whose body was found in the garden of Mia's Morsels. Now it's up to Mia to conjure up a killer before everything she's worked so hard for vanishes with a poof! 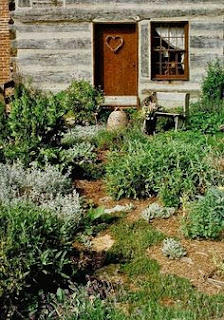 Two Wicked Desserts by Lynn Cahoon is the 2nd book in A Kitchen Witch Mystery series.  It can be read as a standalone, but I suggest reading One Poison Pie first.  It gives you the backstory on Magic Springs, Idaho.  Mia Malone is getting Mia’s Morsels up and running with help from her grandmother and ex-fiancé’s sister, Christina.  Mia is also learning about magic and spells.  I find the characters to be developed and realistic.  We get to follow Mia as they go about her everyday life (cooking, eating, learning magic, shopping, making menus, going out with Levi).  A stranger is found dead behind Mia’s new residence.  Mia finds herself once again dealing with Detective Mark Baldwin.  When Baldwin becomes fixated on Dorian’s daughter, Cindy as the guilty party, Mia works to prove she is innocent.  The mystery was light.  It was not the central focus of the story.  There are a limited number of suspects which makes solving it a cinch.  I believe more time was spent helping Cindy figure out which spell she activated than on the mystery.  The paranormal element is sprinkled throughout the story.  We get to learn more about kitchen witches and how they are different from other witches in town.  The school may also have a dark history.  Mia is trying to learn more about the school and the witches who helped build it.  Mary Alice, Mia’s grandmother, and Mia spend time trying to find the correct spell to free Dorian from Mr. Darcy’s body.  Dorian is not enjoying his time in a cat’s body.  Gran, though, does not seem to be giving it her best effort.  The grandmother has something she wishes to discuss with Mia, but she never gets out the full story.  I hope we get closure on this issue soon.  Christina is having relationship issues plus problems with her new friend.  I found the pacing to be mixed (sometimes the story moved along at a good pace and other times it was slow) and the ending was anticlimactic.  Two Wicked Desserts is a charming story with fun characters, but I felt it needed a little more work.  I am, though, curious to find out what happens next with Mia and the gang especially as to why Trent can hear Gloria.  Two Wicked Desserts is a magical tale with a spell gone amiss, a gifted grimoire, a selfish friend, a covert room, a deceased stranger, and mouthwatering meals. 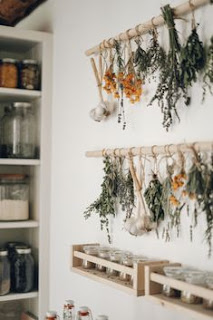 Two Wicked Desserts is available from Amazon*.  The other books in A Kitchen Witch Mystery series are One Poison Pie (can be borrowed with Kindle Unlimited) and Murder 101 (a novella which can also be borrowed with Kindle Unlimited).  The next A Kitchen Witch Mystery Novella is Have a Holly, Haunted Christmas releasing October 26.  You can find Lynn Cahoon's other cozy mysteries here.  Lynn has A Killer Christmas Witch publishing September 14.  It is the latest A Cat Latimer Mystery.  Thank you very much for dropping by today.  Tomorrow I am featuring Murder, She Edited by Kaitlyn Dunnett.  It is the 4th A Deadly Edits Mystery.  I am off to put together a metal planter that is going near out front door (it is powder blue).  I hope that you have an enchanting day.  Take care, be kind, and Happy Reading! 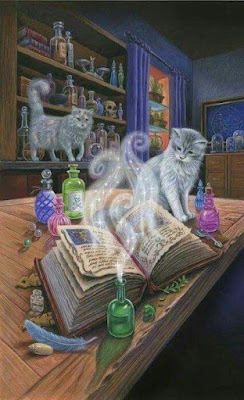