Stabbed in the Baklava: A Kebab Kitchen Mystery plus a Giveaway! 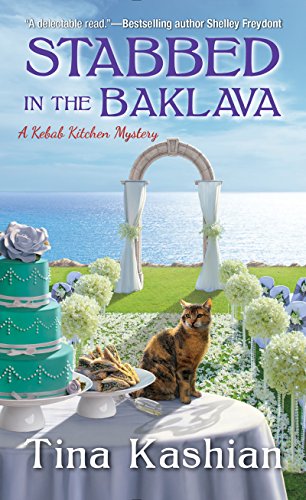 Lucy Berberian has taken over her family’s Mediterranean restaurant on the Jersey Shore after an unsatisfying stint at a Philadelphia law firm. It’s great to be back in her old beach town, even if she’s turning into a seasoned sleuth . . .
Catering a high-society wedding should bring in some big income for Kebab Kitchen—and raise its profile too. But it’s not exactly good publicity when the best man winds up skewered like a shish kebab. Worse yet, Lucy’s ex, Azad—who’s the restaurant’s new head chef—is the prime suspect. But she doesn’t give a fig what the cops think. He may have killer looks, but he’s no murderer. She just needs to prove his innocence, before he has to go on the lamb . . .
Recipes included!

Tina Kashian spent her childhood summers at the New Jersey shore, building sand castles, boogie boarding, and riding the boardwalk Ferris wheel. She also grew up in the restaurant business where her Armenian parents owned a restaurant for thirty years. She worked almost every job—rolling silverware and wiping down tables as a tween, to hosting and waitressing as a teenager.

After college, Tina worked as a NJ Deputy Attorney General, a patent attorney, and a mechanical engineer. Her law cases inspired an inquiring mind of crime, and since then, Tina has been hooked on mysteries. The Kebab Kitchen Cozy Mystery series launches with Hummus and Homicide, followed by Stabbed in the Baklava and One Feta in the Grave by Kensington Books. Tina still lives in New Jersey with her supportive husband and two young daughters. Please visit www.tinakashian.com and join her Newsletter to enter free contests to win books, get delicious recipes, and to learn when her books will be released.

Stabbed in the Baklava by Tina Kashian is the second A Kebab Kitchen Mystery.  Lucy Berberian is now the manager of her family’s restaurant, Kebab Kitchen in Ocean Crest, New Jersey.  Lucy is surprised when Philadelphia socialite, Scarlet Westwood asks Kebab Kitchen to cater her wedding in two weeks.  It is a tight timeline for the restaurant, but it would be excellent publicity.  Two weeks later they arrive at Castle of the Sea prepared to wow the wedding guests with their cuisine.  Preparations are going well until a drunken Henry Simms, local banker, stumbles into the kitchen and ends up in a verbal disagreement with Azad Zakarian, Kebab Kitchen’s head chef.  After extricating Henry from the kitchen, the rest of the meal goes off without a hitch.  Henry is later found in Kebab Kitchen’s van with a shish kebab skewer thrust through his neck.  Detective Calvin Clemmons, unfortunately, is assigned the case and he has narrowed his sights on Azad.  Lucy, at the urging of her parents, works to prove Azad’s innocence and unveil the killer.  Accompany Lucy on her campaign to decipher the clues and spot the individual who skewered the banker like a shish kebab!

Stabbed in the Baklava contains good writing and a nice steady pace which makes for an easy to read cozy mystery.  While Stabbed in the Baklava is the second book in series, it can be read alone.  The author provides Lucy’s backstory and summarizes the mystery from Hummus and Homicide.  Lucy has settled into managing the restaurant and is learning how to cook as well.  There are some luscious food descriptions that will have readers craving Mediterranean food.  Her attempts at making improvements at the restaurant have met with limited success.  Lucy has two love interests which include her old boyfriend, Azad Kazarian who has her parent’s approval and the handsome motorcycle riding Michael Citteroni.  While a cozy mystery needs to have some romance (it is expected), I prefer it to play out softly in the background and I am tired of love triangles.  The murder mystery was ingenuous.  I identified the victim and killer before the victim was skewered.  Lucy needs to work on how she asks suspects questions.  She lacks subtlety and her questions come across as accusatory (I am sure she will get better in time).  I hope the author introduces a new detective in a future book.  Detective Clemmons is the cliché nasty detective with a grudge because of an incident that occurred in high school.  I appreciate Lucy’s best friend, Katie Watson.  She is a lively character with an upbeat personality.  Katie is always up for adventure and has inside intel thanks to her police officer hubby.  I did feel that there was too much time devoted to Lucy speculating on the crime and I could have used less repetition of key details (like Lucy’s lack of cooking skills).  Stabbed in the Baklava is an undemanding cozy mystery with a quaint small town, charming characters and food descriptions that will have you salivating.  The next book in the series is One Feta in the Grave which will be published on February 26, 2019.

The author is giving away two copies of Stabbed in the Baklava (digital or print--winner's choice).  Click here to go to the giveaway form or use the form below.  Do not forget to leave a comment on my blog for an extra entry.  Please take the time to visit the other stops on the Great Escape Virtual Book Tour (see schedule below rafflecopter form).  There are spotlights, character guest posts, and author interviews. I will be featuring Goodbye Cruller World by Ginger Bolton tomorrow.  I hope you have a mesmerizing day.  Take care and Happy Reading!

August 28 – Cinnamon, Sugar and a Little Bit of Murder – REVIEW

August 29 – Reading Is My SuperPower – REVIEW

September 2 – Cozy Up With Kathy - REVIEW

September 4 – Escape With Dollycas Into A Good Book – REVIEW