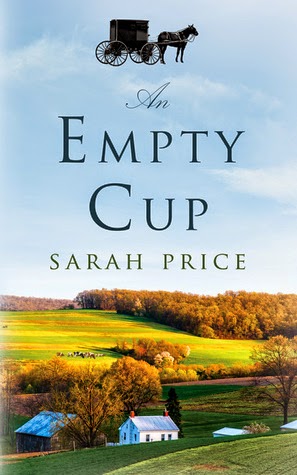 An Empty Cup by Sarah Price is an Amish novel.  In the beginning Rosanna is married to Timothy Zook.  He was so sweet when they were courting, but he was hiding the fact that he drank.  After their marriage the drinking continued to get worse especially after the birth of their daughter, Cate.  Timothy doted on his son, Aaron but would not have anything to do with Cate.  One night Timothy got into his buggy drunk and was hit by a car.

Three years pass and Rosanna is courted by Rueben Troyer.  Rueben owns Troyer Harness Shop and is a kind, gentle man.  Rueben and Rosanna marry.  Rueben moves out to the farm and rents out his home next to the harness shop (it was too small for the married couple along with the two children).  To spend more time with his family, Rueben hires newcomer Nan Keel to help in the harness shop.

Nan and her brother, Samuel come from a different district.  Nan is ambitious, zealous, and rude.  She is not like the other women in their community.  Nan’s main focus is expanding the harness shop.  Soon Rueben starts coming home later and becomes critical (and demanding).  Rosanna keeps quiet and just continues to help.  Rosanna is unable to say no when asked for help.  Rosanna is a giver.  She continues to run the household, take care of the garden, and much more.  She starts experiencing anxiety attacks (though she does not know that is what they are).  Slowly Rosanna becomes quieter and starts shutting down.  Rueben is so busy with the shop that he does not notice.

Rosanna also has to deal with a problem neighbor.  Gloria is their non-Amish neighbor who continually harasses the family over the low fence.  It gets so bad that Rosanna nor Cate wants to work in their garden.  Rueben refuses to address the issue.

When one of the preachers passes away, Rueben draw the lot to become the new preacher.  This is just too much for Rosanna and she shuts down.  To find out what is wrong with Rosanna, please read An Empty Cup.

I give An Empty Cup 4 out of 5 stars.  It is well-written and has a good message, but it is not a novel that will make you smile.   An Empty Cup deals with a serious issue and Sarah Price handles it beautifully.  It is important to remember that an empty cup cannot give!

An Empty Cup will be out on April 14, 2015.  It will be available on the Kindle Unlimited Program if you are a member.

Thank you for visiting and reading my review.  Have a great week and Happy Reading!

Kris
Posted by Kris Anderson, The Avid Reader at 2:43 PM