To Fudge or Not to Fudge 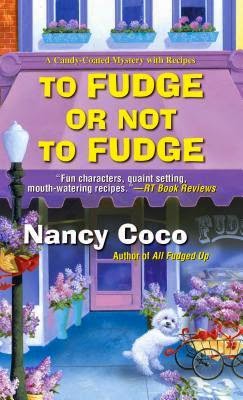 To Fudge or Not to Fudge by Nancy Coco is the second book in the Candy Coated Mystery series. Allie McMurphy is running the Historic McMurphy Hotel and Fudge Shoppe on Mackinac Island.  Allie went to culinary school and is now making delicious fudge for the shop.  She has some great help who is teaching her how to run the hotel (since her grandfather passed away unexpectedly).  Chef Peter Thomas is visiting the island.  He is Allie’s former instructor and mentor from culinary school.  Chef Thomas is the judge of a reality television show featuring fudge.  They are short a contestant and he wants Allie to audition for the show.  When Allie hears the salary, she agrees to audition (reluctantly).  Unfortunately for Allie, she does great and is now a contestant on the show (the salary will come in handy for renovations she wants to make to the hotel).   Tammy Gooseworthy (that is really her name) is the new pastry chef at the new Grander Hotel.  She wants on the show and is being very persistent.

Allie and the staff are also getting ready for the Lilac Festival.  Jenn (Jennifer Christensen) is Allie's best friend and is an event planner.  Jenn is helping out at the McMurphy during Allie’s first season.  Allie is going to make a lilac fudge, and Jenn suggests that they old lilac teas.  While Allie is on her way to the newspaper to place an ad (while walking her adorable dog, Marshmallow-Mal for short) he starts digging under a lilac tree next to the newspaper.  He comes out with a bone between his teeth.  Before Allie can react, Mal dives back under the tree.  When the police arrive (Office Rex Manning), they agree that they are human bones.  Mal is not the only dog who found bones.  Daisy, the St. Bernard, is running around the island and has found bones.  But Daisy does not want to give them up.  Daisy ends up getting put in jail after swallowing a bone.  Her owner, Mrs. Finch, keeps Daisy company.

Allie is busy recording the fudge contest reality show (all of the contestants are actors) at night and then up early making fudge.  It seems every time Allie takes Mal out for a walk, Mal is finding more bones.  Who do these bones belong to and why were they killed?  Then one of the contestants in the show turns up dead.  Unfortunately, Allie was the last person (before the killer) to see her alive.  Then Chef Peter Thomas is hurt and has to be flown out to a mainland hospital.  Jenn (Jennifer Christensen), is Allie’s best friend and an event planner.  Jenn finds herself attracted to crime scene tech, Shane Carpenter.  With all the bones being found, there are plenty of crime scenes and chances to Jenn to see Shane.

Allie and the gang will have their work cut out for them trying to find the killer.  To Fudge or Not to Fudge is a cute and fun cozy mystery.  It even includes some fudge recipes that sound delightful (especially the peanut butter fudge).  I give To Fudge or Not to Fudge 4.25 out of 5 stars.  The book needed an epilogue to wrap up some of the story lines.  It was never announced who won the contest on the reality show.  There also was not a conclusion with Chef Thomas.  We know he got better, but I think Chef Thomas should have come back to the island, stayed at McMurphy, we find out how he is doing and they watch the finale of the bogus fudge making show.  The mystery was very easy to solve.  I do like the characters in the book (especially the adorable little puppy) and the mystery had some twists and turns (always love that).  To Fudge or Not to Fudge is currently $1.99 on Amazon.  The next book in the series is Oh Say Can You Fudge and it will be out on Tuesday, April 28, 2015!


I am currently reading Take Another Look by Rosalind Noonan.   Thank you for visiting and reading my review.  I hope you have a good week!  Happy Reading!

Posted by Kris Anderson, The Avid Reader at 7:28 PM