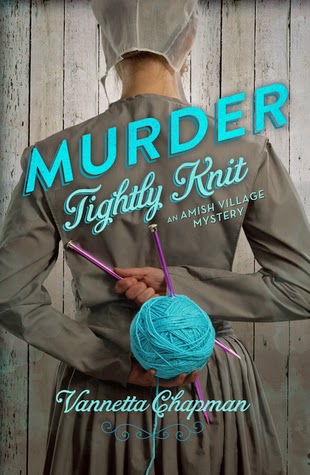 Murder Tightly Knit by Vanetta Chapman is a delight to read.  It is a great cozy mystery and it is the second book in An Amish Village Mystery series.  Amber Wright is now Amber Wright Bowman.  Amber and Tate were married and are now living on Tate’s farm.  Preston is living in Amber’s old home (Preston was the homeless man in Murder Simply Brewed) has a job.

Amber is in a good mood until she hears about the death of Owen Esch with a cross bow.  It is such an unusual way to murder someone.  Something is also going on with Mary Weaver, the manager of The Cat’s Meow.  Jesse’s older brother, Andrew Miller has also returned to the community.  His parents are thrilled that he is back, but Jesse is less than enthusiastic.  Jesse wants to know why he has returned now and what is Andrew is hiding.

Amber, Tate, Hannah, and Jesse set out to find out what happened to Owen while avoiding Roland Shaw, a federal agent from Indianapolis (he has rubbed all of them the wrong way).  Jesse and Hannah try to figure out what is going on with Andrew as they continue to grow closer.  Will there be another wedding soon?  Amber has hired a new assistant manager.  Her name is Pam Coleman and she is a lively addition to the Amish Village.  To return to Middlebury, Indiana and the Amish Artisan Village, read Murder Tightly Knit.

I give Murder Tightly Knit 5 out of 5 stars.  Great second book with a wonderful mystery.  This series has likeable characters and a town that you would love to live in (at least I would).  I look forward to the next book in this series, Murder Freshly Baked.

Thank you for checking out my latest review.  I am currently reading Threads of Deceit by Mae Fox and Jan Fields.  Have a nice evening and Happy Reading!

Kris
Posted by Kris Anderson, The Avid Reader at 7:21 PM