Oh Say Can You Fudge 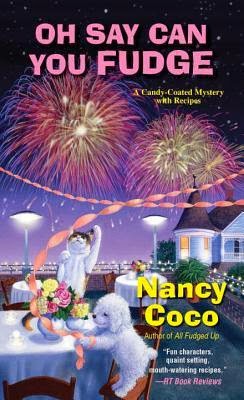 Oh Say Can You Fudge by Nancy Coco is the third book in A Candy-Coated Mystery series.  The residents of Mackinac Island are getting ready for their Star Spangled Fourth celebration.  Allie McMurphy, who runs the McMurphy Hotel and Fudge Shoppe, wants to offer a red, white, and blue fudge so she is experimenting in the kitchen and ignores the ringing of her phone.  When Allie finally checks her messages, she finds that Rodney Rivers has been trying to reach her.  Rodney is the pyrotechnic expert for their fireworks display.  Allie joined the committee responsible for fireworks and had them change from the company they have used previously.  Rodney left a voice mail stating that someone had sabotaged the fireworks and wanted Allie to come to the warehouse where they are being stored right away.

When Allie arrives at the warehouse she finds a dead body.  Allie immediately calls the police (Charlene, the dispatcher, cannot believe she found another dead body) who tell her to get out of the warehouse (since the fireworks have been tampered with).  Officer Rex Manning arrives quickly (he wanted to date Allie but she is seeing Trent Jessop) and the bomb squad is airlifted in.  Unfortunately, the warehouse blows up and the body along with it!  Who would kill Rodney Rivers and sabotage the islands fireworks?

Thankfully, no one was injured from the explosion.  Allie finds out that there is a firebug on the island.  There have been five fires on the island in the past few months.  Allie and the gang set out to solve the string of fires as well as Rodney’s murder (they even set up a murder board in the lobby of the inn).  Allie also has to get more fireworks (the chairman of the committee is breathing down her neck), work out the red, white, and blue fudge, find a licensed pyrotechnic expert to set off the fireworks (and it is just a few days before July 4), figure out who sets the fires, and who killed Rodney Rivers-easy peasy!  And, her parents have come to check on her (they heard about the explosion) and decided to stay a few days!

Poor Allie!  But I think with the help of her friends and family, she will be able to handle everything!  I give Oh Say Can You Fudge 4.5 out of 5 stars.  I enjoyed the story, but the mystery was very easy to solve (it can be solved in the first 50 pages).  I like the characters that Nancy Coco has created and there are some wonderful fudge recipes in the book. Oh Say Can You Fudge can be read without having read the previous two books in the series.  Oh Say Can You Fudge will be out on Tuesday, April 28, 2015.  If you like cozy mysteries, you will enjoy reading Oh Say Can You Fudge!  The fourth book in this series is All I want for Christmas is Fudge.  It will be out (according to Amazon) on September 29, 2015!  I have already pre-ordered my copy!

I received a complimentary copy of this book from NetGalley (and the book Publisher) in exchange for an honest review.

Thank you for reading my review.  I am currently reading Take Another Look by Rosalind Noonan.  Have a great evening and Happy Reading!

Posted by Kris Anderson, The Avid Reader at 7:39 PM