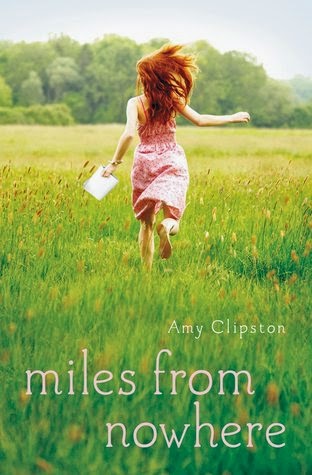 Miles from Nowhere by Amy Clipston is a new young adult Christian book.  Chelsea Morris has just graduated from high school and it is her last summer before college.  Chelsea is working part-time at the Fork and Knife, lead costumer for Cameronville Community Theater’s production of Grease, and helps out her mother around the house and with her younger twin brothers.  Chelsea has always been a good and responsible young woman, but she is feeling restless and wants to have some fun.

Todd, Chelsea’s boyfriend for the last three months, also works at the Fork and Knife which is owned by Todd’s parents.  Todd is working full-time as a cook and is tired at the end of the day.  This leaves an opening for Dylan McCormick.  Dylan is in Grease and has been flirting with Chelsea.  When Dylan invites Chelsea to a cast party, she wants to go.  Todd, though, is too tired. Chelsea ends up going by herself and this is the start of her downfall.  Chelsea ignores warnings from friends and continues to go to Dylan’s parties.  Chelsea is soon sneaking out of the house, drinking alcohol, forgetting her responsibilities, and showing up late for work.  She also takes advice from Dylan which backfires.

Miles from Nowhere is a well-written and deals with serious issues (drinking and driving, responsibilities, forgiveness).  It tells of the consequences of bad actions and decisions.  I had trouble getting into this book and connecting with the characters.  I give Miles from Nowhere 3.75 out of 5 stars.  I think I will stick with Amy Clipston’s Amish stories (which I love).

Thank you for checking out my review.  I hope you are having a great week and are reading some wonderful books!  Happy Reading!

Posted by Kris Anderson, The Avid Reader at 5:25 PM