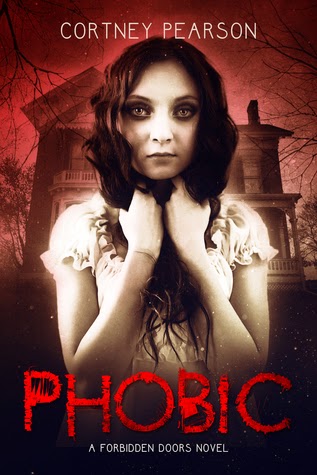 Phobic by Courtney Pearson is the first book in The Forbidden Doors series.  It is a young adult paranormal horror story.  Piper Crenshaw is fifteen years old, has terrible acne, father died ten months ago, and her mother is in prison for murder!  Just your typical teenager—wrong!  Her older brother, Joel is her guardian and Todd Dawes, who lives next door, is her best friend.  They live in a beautiful old Victorian home that has been in their family for a couple of generations.  When they changed towns to get away from publicity regarding the murder, their father moved the house.  In all the time they have owned the house they have never needed to do repairs or replace anything in the home.  Everything in the house still looks brand new.  They do not have to do yard work.  Their home is alive.

Piper is starting to have visions while in the house.  She can see scenes from the people who lived in the house when it was first built.  Augustus Garrett, his maid, Ada, and driver, Thomas are in the scenes.  Garrett was a nasty man who was cruel.  He killed people in the basement for parts.  Pipe does not know what is going on?  There were certain rules her father had in place.  Do not go into the basement and do not open the door behind his desk in the library.  Unfortunately, Piper violates both rules.  Then ten horrible teens from school come to the house one night.  They want to know what is behind the door to nowhere (a door on the outside of the house above the library).  When one of the teens takes an axe to the door, Pipe starts bleeding from her stomach!  What is going on?  Why when something happens to the house it happens to Piper?  Then her brother goes missing.  What is going on with the house, Piper, and where is Joel?  What was Augustus Garrett doing with the body parts?   Piper along with Todd set out to find answers to their questions.

I give Phobic 3.5 out of 4 stars.  The book is okay, but it did not flow smoothly.  It was very stilted (that is the only word that comes to mind).  There is graphic violence and gore in the book (it is a horror story).  It is on sale for $.99 on Amazon.com.

Thank you for reading my review.  I am off to watch Flash.  Have a wonderful week and Happy Reading!

Posted by Kris Anderson, The Avid Reader at 8:05 PM