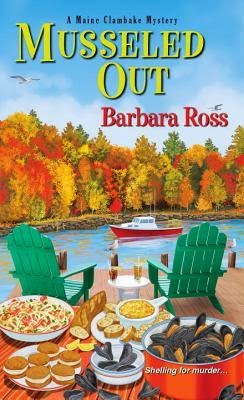 Musseled Out by Barbara Ross is the third book in A Maine Clambake Mystery series.  Julia Snowden had taken a leave of absence from her job working in venture capital and is helping her family run The Snowden Family Clambake Company (getting it back from the brink of bankruptcy).  Owen Quimby, H.R. Director, has called saying she needs to come back to work or they are going to fill her position.   Julia cannot decide what to do.  She is given until Friday to make up her mind.  The season is ending and they have to close everything up out on Morrow Island (the private island the family owns where they hold the clambakes).  Julia’s sister, Livvy, along with her husband, Sonny, and their little girl, Page have already moved back to the mainland.  Julia has to decide whether to get an apartment, live with her mother (she does not like that option), or move in with her boyfriend, Chris Durand.  Julia has trouble with commitments and does not think she is ready to move in with Chris.

The afternoon after looking at an apartment, Julia is out on Morrow Island.  She sees a lobster boar drifting around.  Lobster boats did not drift and Julia does not see anyone on board (from her position on the island).  She calls in the Coast Guard and they haul the boat to Busman’s Harbor.  When the boat is pulled up, they find David Thwing tangled up in the trap lines.  Mr. Thwing along with Genevieve Pelletir (his chef and business partner) are opening a rival business.  He was known as The Mussel King and had several restaurants.  He was now going to offer gourmet meals instead of clambakes.  Sonny had been opening opposing him.  The owner of the boat, Peter Murray, was not on the boat.  Everyone is out looking for Peter.  Sonny is the police’s number one suspect.  Livvy asks Julia to find out where Sonny was that day and prove him innocent.

Julia has to clear Sonny’s name, find the real killer, decide if she wants to stay on the island or go back to Manhattan, and where she wants to live.  Julia does not seem to be able to make decisions so she sets out to solve the murder.   Something is also wrong with Mrs. Gus.  She collapses and is rushed to the hospital.  It turns out that her medication for arthritis had a foreign substance on them.  But where did the medication come from?  There is no label on them.  Kyle, Sonny’s younger brother, seems to have a drug problem.  But where is getting the drugs and the money to pay for them?  Do the drugs tie into David Thwing’s murder?  Julia has her work cut out for with the mystery!

Musseled Out is a great cozy mystery.  This book can easily be read as a stand-alone (if you have not read the two books before Musseled Out).  I give Musseled Out 5 out of 5 stars.  Musseled Out has romance, humor, interesting characters, an independent cat named Le Roi, and a good mystery.  The mystery was medium level.  Not super easy to solve, but not too hard.  I look forward to the next book in this series!  The first two books in the series are Clammed Up ($2.51 and on Kindle Unlimited) and Boiled Over (currently $1.99 and on Kindle Unlimited Program)


Musseled Out will be released on April 28, 2015.  I am currently reading To Fudge or Not To Fudge by Nancy Coco (which is currently on sale for $1.99).  I have not had a chance to read it until now (it is very good).

Have a wonderful and enjoyable evening!  Happy Reading!

Posted by Kris Anderson, The Avid Reader at 8:05 PM