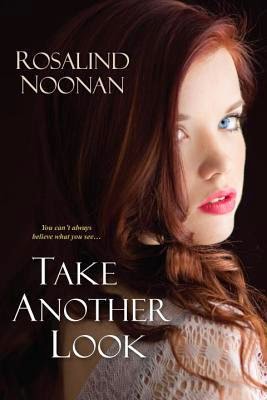 Take Another Look by Rosalind Noonan is a book of suspense.  Jane Ryan is pregnant and running.  She was living with police officer, Frank Dixon.  At first he was charming and kind but after Jane moved in with him, he became controlling, demanding, and abusive.  Jane ran to her friend, Marnie who lives in Seattle with her husband.  Jane knows that she will not be able to afford to keep both children.  She finds a nice family, the Zaretsky’s, to adopt one of the girls.  Jane has now given birth and has to decide which twin to keep.  Louisa is a calm and quiet little baby.  Harper has not stopped crying.  Jane wants to make sure that her adopted family will love her and want to keep her, so Jane gives up sweet Louisa.

Almost fifteen years later, Jane and Harper are living in Mirror Lake, Oregon.  Harper is always moving.  She loves sports.  Jane teaches freshman English at Mirror Lake High School where Harper will be a sophomore.    Jane is dating science teacher, Luke Bandini, but they have kept their relationship quiet.

One day a man is seen around the school asking for Jane.  She is scared.  Jane thinks that Frank has finally found her.  Someone shows up at her house later that night pounding on the door.  Turns out to be a detective with information about Frank.  Frank has finally been arrested.  He attacked the wrong woman (her father was a bigwig).  Turns out Frank Dixon is a sociopath.  He comes from a family of murderers.  Now Jane is worried about Harper.  How big a role do genetics play?  Nature versus Nurture?

Harper has never been the easiest child but she is starting to act out.  Jane is keeping a close eye on her.  Harper is on the school’s softball league and her position is taken away from her by Olivia.  Olivia’s father has a lot of influence in the community and the poor coach was not given a choice.  Harper states she hates Olivia and wishes she was dead.   The day of the school picnic dawns bright, but something sinister happens to Olivia.  Olivia is found unconscious and floating in the lake.  Harper, of course, is the first suspect.  Olivia, when she awakens, has no memory of the accident and is unable to play softball for quite a while.  Turns out Olivia was hit with a softball bat!  Want to guess whose bat was missing from her bag?

Harper claims innocence in the incident with Olivia.  The police do not have any witnesses and the crime goes unsolved.  Soon Harper mentions a new girl at school who everyone says looks just like her.  The other girl turns out to be Isabel Louisa, the daughter Jane gave up for adoption.  Christy Zaretsky is now a widow and has moved to Mirror Lake because she is ill and wants to make sure Isabel will be taken care of if something happens to her.  Isabel knows she was adopted and immediately takes to Jane.  Once Harper finds out the truth the two are bosom buddies.

Unfortunately, Christy Zaretsky takes a turn for the worse and has to be hospitalized.  Isabel comes to live with Jane and Harper.  Isabel is very kind, helpful and sweet.  Harper starts resenting her.  As the weeks go by Harper wants Isabel gone from the house.  Things go missing or broken and Harper gets blamed.  Then, when they are watching the science classes guinea pigs, one ends up dead.  Christy gets moved to a hospital back in Seattle (her sister moved her).  Now Jane cannot get Christy to return her calls.  What is going on?  Who is really at fault?

I had a good time reading Take Another Look.  I had an idea how it would turn out, but I just had to keep reading.  I give Take Another Look 4.5 out of 5 stars.  I love books that draw you in to the story and you just cannot put the book down.  I have tried to give you an idea of what the story is about without giving away too much.  I hope you will read Take Another Look and enjoy it as much as I enjoyed reading it.

I received a complimentary copy of this novel from NetGalley (and Kensington Books) in exchange for an honest review.

It really makes you wonder how significant a role do out genes or DNA play in our lives?   Thank you for visiting and reading my review.  I am off to watch Arrow!  Have a great week and Happy Reading!

Kris
Posted by Kris Anderson, The Avid Reader at 7:57 PM