Murder on the Hill 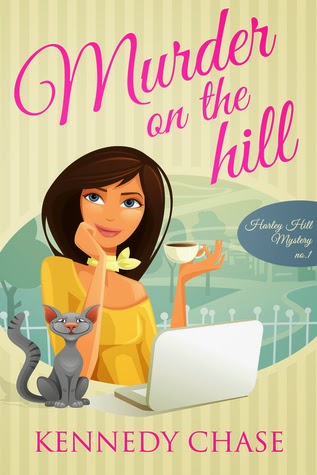 Murder on the Hill by Kennedy Chase is the first book in the Harley Hill Mysteries.  Harley Hill has not been having the best of luck.  She was dropped off at foster care when she was little with just a photograph.  The photograph was of her with three girls and a boy.   Written on the back of the photo was “you are not alone.”  Harley, which is not her real name, has had trouble finding a permanent job.  She knows antiques and is good at finding objects.  A recent job, though, did not go as planned.  She was acquiring diamonds for crime boss, Anton Ivanov and one got lost.  Harley is not quite sure what happened to it, but Anton believes she stole it.  Anton now wants repayment of $5,000 a month.  That is a little steep for someone with a regular job.

Cole Lockland is Harley’s best friend.  He has found a position for Harley with Cordelia Silvers of the Silvers Finders Agency.  Her first job is to figure out why someone broke into Mr. Bellman’s jewelry shop and left a doru (a Japanese doll).  It was left as a warning.  Harley goes home with Cordelia and accidentally drops the doru (thank goodness it was just a fake).  Inside the doru is a black diamond.  While investigating Mr. Bellman’s wife ends up dead and now Alex, Cordelia’s almost ex-husband and homicide detective, is on the case.  Harley finds Alex to be drool worthy, but tries not to show it in front of Cordelia.   Why is a black diamond inside the doru and why was it left at Bellman’s?  Was Mrs. Bellman murdered?  What is going to happen next?  Harley and Cordelia set out to solve the riddle while Harley works hard to keep hidden from Anton (she would like to keep her legs intact).

Murder on the Hill is a cute and humorous cozy mystery.  The story is not long and get easily be read in a couple of hours.  The mystery is not easily solved and when the book ends you wonder what Harley will get up to next.  I give Murder on the Hill 4 out of 5 stars.

Other books in the series are Murder on the Page and Murder in th e Kitchen.  Murder on the Hill is currently $.99 and is on the Kindle Unlimited Program.

I received a complimentary copy of this book in exchange for an honest review.

I love cozy mysteries!  When I started reading them, there were just a few cozies out there.  I am glad that this genre has taken off!  Have a lovely evening and Happy Reading!

Posted by Kris Anderson, The Avid Reader at 7:10 PM