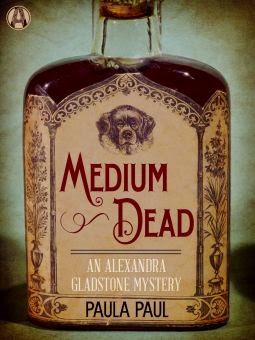 Medium Dead by Paula Paul is An Alexandra Gladstone Mystery novel.  It is the fourth novel in the series.  However, Medium Dead can be read without having read the other books in this series.  Dr. Alexandra Gladstone is the local doctor for Newton-upon-Sea.  She sees patients in her surgery (office) as well as making rounds to people too sick (or too wealthy) to come to her office.  Nancy (who has been her companion since childhood) is her assistant, surgery nurse, and maid-of-all-work.

Alvina Elwold is the local spiritualist (she contacts the dead).  Queen Victoria Regina has come to have Alvina hold a séance.  The Queen wishes to contact her deceased husband, Prince Albert (who has been dead for twenty years).  Within hours of meeting the Queen, Alvina is found dead in the graveyard.  Her throat slit by someone who is a novice with a knife.  Alexandra is drawn into the investigation.  She has the help of Nancy and Nicholas, the Sixth Earl of Dunsford and a barrister.  There is an attraction between Nicholas and Alexandra, but Alexandra will not let them be more than friends.  She knows that they cannot be more because of status (she is middle class while he is peerage).

We also have Nicholas’ mother, Lady Forsythe, who is stressed out over the Queen’s visit (she has made herself ill), Constable Robert Snow, Young Beaty (there is his father who is Old Beaty), Wilma Beaty, and the young boys, Rob and Artie, who work for Dr. Gladstone.

I give Medium Dead 4 out of 5 stars.  It is an amusing book, kept my interest throughout, good characters, and some laughs, but the murder was very easy to solve.  It sometimes felt that the characters were so focused on propriety (which was very important during Victorian times) that they forgot they were trying to solve a murder and keep an innocent man from going to jail.   I will be curious to see what happens between Dr. Gladstone and Nicholas.

To see a list of of Paula Paul's books, click here! Medium Dead is currently available for $2.99 on Amazon.

Thank you for reading my latest review.  I am currently reading The Inn at Ocean's Edge by Colleen Coble.  Have a wonderful evening and Happy Reading!