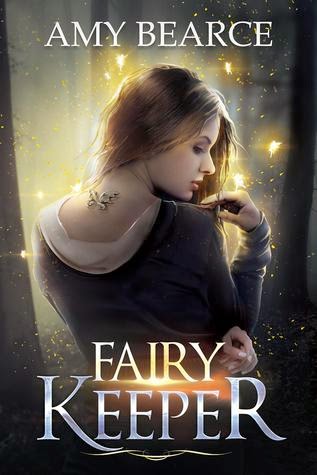 Fairy Keeper by Amy Bearce is a paranormal novel for young adults. Sierra Quinn is a 14 year old Fairy Keeper.  She was born with the mark of the keeper on her neck (fairy wings).  Sierra can communicate and attract fairies.  Sierra does not like being a keeper because she dislikes being told what to do.  One day she is checking on her fairies in their hatch and discovers all the worker fairies are dead and the queen is missing.  Her father, Jack will not be pleased.  Jack is a nasty man.  He makes Sierra collect fairy nectar which he uses in poisons and drugs (especially a drug called Flight).  Sierra only stays around because of her sister, Phoebe (who was not born a keeper).

Jack is upset when he finds out about the nectar.  He then states that Phoebe (who is only 10) will have to go work for Elder Graham Bentwood.  Bentwood is a big man, has a nasty temper, and sells drugs.  Sierra makes a deal with Jack.  She will bring back the queen and Phoebe will not have to go work for Bentwood (at least not for another year).  Jack agrees with the bargain on the condition that his enforcer, Nell goes with Sierra.  Sierra cannot stand Nell, but she will tolerate her on the trip for the sake of her sister.

Sierra and Nell embark on an adventure to find the missing fairy queen.  As they start their trip, Sierra stops at her friend, Corbin’s house to check on his fairies.  Corbin is also a fairy keeper and has read everything he can find on fairies.  Corbin’s queen is missing as well and his worker fairies are dead.  Corbin joins Sierra and Nell on their quest.  It is a long journey and will be full of adventure.

The Fairy Keeper is a cute story and is aimed at young adults.  There is violence in the book and concepts are for an older young adult.  The book does place an emphasis on not over using natural resources which is a good thing for young adults to learn.  I give Fairy Keeper 4 out of 5 stars.  I liked the story but did not fall in love with it.  Fairy Keeper is available on Kindle Unlimited.

Thank you for checking out my latest review.  I am currently reading Moonlands by Steven Savile.   Have a wonderful evening and Happy Reading!

Posted by Kris Anderson, The Avid Reader at 7:37 PM