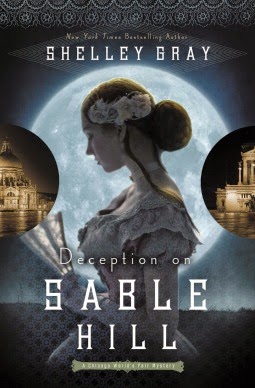 Deception on Sable Hill by Shelley Gray is a lovely historical Christian mystery.  It is the second book in the Chicago World’s Fair series. It is September 1893 in Chicago, Illinois.  The World’s Fair is in Chicago and will be closing at the end of October.   Eloisa Carstairs has been “out” for two years (as a debutante).  Her mother is determined to marry her off and always want her to look “perfect”.  Eloisa suffered horribly at the hands of Douglass Sloane and is still having trouble going out.  Eloisa wants more in her life.  She wants to help people.

Unfortunately, the Society Slasher is attacking young ladies at society functions.  Lt. Detective Sean Ryan and his partner, Detective Owen Howard are on the case.  Owen Howard is called the gentleman detective because he comes from a rich, high class family (and wears custom made suits).  Owen, though, is the third son and will not inherit and he wants to make a difference.  Sean Ryan comes from a large, poor, Irish family.  He is scorned by most people in his neighborhood for becoming a police officer.  Sean Ryan is a good detective and he is determined to find the Society Slasher and stop him.

Eloisa is at an event when the slasher strikes again.  Sean was on the scene and he comforts her.  Sean and Eloisa are attracted to each other, but they each know that they cannot be together (because Eloisa is from the upper classes and Sean comes from a poor family).  During the course of the investigation, Sean and Eloisa get to know each other better.  At the same time, Owen is interested in Sean’s younger sister, Katie.  Owen does not care about the difference in their stations.

Read Deception on Sable Hill to see Sean and Owen catch the Society Slasher and how love can cross the divide of social classes.  I give Deception on Sable Hill 4.5 out of 5.  It is a lovely romance and mystery novel.  You also get to catch glimpses of the Chicago World’s Fair.  I look forward to reading the next book in this series by Shelley Gray.

I love book release Tuesday!  I hope you had a lovely Easter weekend.  Have a good evening and Happy Reading! 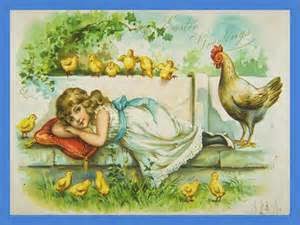 Posted by Kris Anderson, The Avid Reader at 6:27 PM