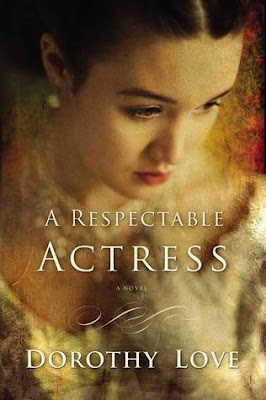 Happy Television Talk Show Host Day!  It was originally created to honor Johnny Carson's birthday, but it celebrates all talk show hosts!  I have to admit I do not watch talk shows.  They are always over the top and controversial (for the most part).  I wonder they celebrate book lover day? I will have to look into it!

A Respectable Actress by Dorothy Love is a lovely historical romance/mystery novel.  India Hartley is doing an acting tour.  She is currently in Savannah just before Christmas in 1870.  India is performing at the Southern Palace Theater.  Cornelius Philbrick is the manager of the theater and he has decided to spice up the evenings performance for a critic.  He insists that India shoot (pretend) the person in the play instead of hitting him over the head.  Cornelius states the firing pin was taken from the gun.  India protests but if she does not do as he asks, then she will be replaced (and she needs the money).  India does as directed and Arthur Sterling (the actor she was to pretend to shoot) is really shot.  India is immediately arrested for the crime.

An admirer Mrs. Sutton Mackay hires Mr. Philip Sinclair to be her lawyer.  Philip takes India off to his plantation Indigo Point on St. Simon’s Island to work on her defense (and so she does not have to stay in jail).  Philip is working to restore St. Simon’s Island and his plantation.  India discovers a mystery in the house with a closed room set up like a shrine and a missing former slave girl.  India discovers a vital clue that could solve the mystery and could lead to her freedom.  Will Philip and India be able to figure out who really killed Arthur Sterling in time to save India?

I received a complimentary copy of A Respectable Actress from NetGalley in exchange for an honest review.

I am currently reading Mrs. Roosevelt's Confidante by Susan Elia MacNeal (slow starter).  Please consider becoming a follower of my blog.  You can follow by email or through Google+ (at the right).  I hope everyone has a great Friday and a lovely weekend.  Happy Reading!

Posted by Kris Anderson, The Avid Reader at 2:39 PM